A Beverly Hills Home With Not One, but Four Kitchens Asks $33.95 Million

In Beverly Hills, a newly built house with four kitchens and an elliptical staircase is listing for $33.95 million.

Seller Daphna Edwards Ziman said she envisioned the style of the five-bedroom, roughly 10,200-square-foot house to be what she calls “Modern Art Deco.” In designing the elliptical stairway, which is in the entryway and spans a reflecting pool and a waterfall, Ms. Ziman said she envisioned a young woman walking down the staircase with “her lover throwing red roses at her feet, one of the red roses with a ring attached to it.” 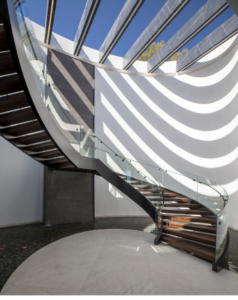 There are four kitchens: a “show kitchen” and a catering kitchen are on the main level so when guests are there, “you don’t see cooking, you just see the result.” There is also the outdoor kitchen by the pool, and another kitchen on the lower level of the house by the guest rooms. “Everything lends itself to privacy,” said Ms. Ziman, who said she considered moving into the house herself but decided not to.

A roof deck can fit 300 people for a sit-down dinner. The lower level contains a bar, a game room, a gym and a screening room with seating for roughly 12 people. 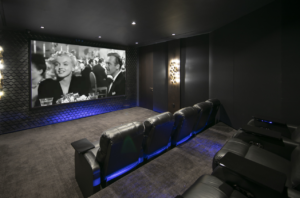 Ms. Ziman is president of Cinémoi, a cable television network, and is the ex-wife of real-estate investor Richard Ziman. She bought the property in 2016 for $7.25 million, according to public records. She demolished an existing home on the site—a hilltop with views of downtown Los Angeles—and started over, spending four years designing and building the current house. She declined to disclose how much she spent building the home.

Outside, the gated property is about a third of an acre, and has a 92-foot-long infinity pool and a motor court with space for about 15 cars.

The house is fully furnished, with some furniture custom-made for the space. The furniture and art are for sale, Ms. Ziman said, but aren’t included in the asking price. 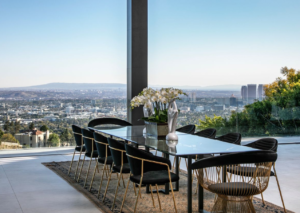 Ms. Ziman said “a couple of movie stars” have already expressed interest in buying the house, but declined to identify them.
Ms. Ziman also owns the onetime Beverly Hills home of Warner Bros. Studios co-founder Harry Warner, which is now listed for $32.5 million after originally hitting the market in 2016 for $39.999 million.

Ms. Ziman said she still lives in the former Warner estate and has been “selective” about buyers for it. “I don’t want to sell to someone who would destroy it,” she said. 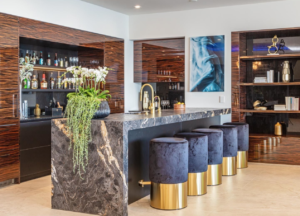 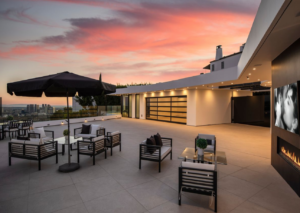