Actress Gwyneth Paltrow and Chris Martin, of Coldplay buy a house in Malibu 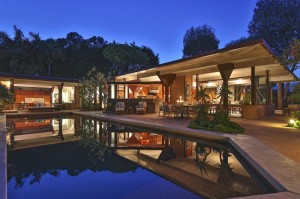 Uncoupling papers will no doubt eventually reveal who gets the John Lautner-designed home, which is set on a secluded acre of land and surrounded by tropical landscaping. The forward-thinking architect designed such structures as the octagonal Chemosphere house in Los Angeles and the poured-concrete Elrod Residence in Palm Springs.

The single-story post-and-beam house the former couple bought was built in 1972 and sits on a street that has seen the likes of Kenny G, Julia Roberts and Charlie Sheen as neighbors.

Architectural details include angled walls and windows, a triangular fireplace that juts into the living room, and a teardrop-shaped granite-topped island in the kitchen.

The 3,650-square-foot house features heated sandstone floors, walls of glass, stainless-steel appliances, a library/study, an office, a gym, a yoga studio, four bedrooms and three bathrooms. There is an outdoor steam room and shower, a tennis court and a pebble stone swimming pool.

Paltrow, 41, won an Oscar for her leading role in “Shakespeare in Love” (1998). Her other film work includes the “Iron Man” movies and “Thanks for Sharing” (2012). She has made several guest appearances on the series “Glee,” for which she won an Emmy, and will be in the upcoming Johnny Deppfilm “Mortdecai.”

Martin, 37, is the frontman for Coldplay and one of its founders. The band has won Grammys for the albums “Viva la Vida or Death and All His Friends,” “Clocks” and “A Rush of Blood to the Head.” Coldplay will release its sixth album, “Ghost Stories,” in May. Martin appeared as a guest mentor last week on “The Voice.”

A big bang for the buck

Kaley Cuoco-Sweeting and her husband, Ryan Sweeting, have listed their place in Sherman Oaks at $2.795 million. They recently bought the Tarzana home of former Laker Lamar Odom and television personality Khloe Kardashian for $5.499 million.

The Mediterranean-style house, built in 2004, is designed for entertaining with an outdoor living room and fireplace, an outdoor kitchen with an eat-at bar, a swimming pool and a spa. Stone fireplaces and interior arches are among architectural details.

A salon/dressing room is outfitted with built-ins, shoe racks and a professional shampoo/hair station.

Cuoco-Sweeting, 28, stars in “The Big Bang Theory,” which has been renewed for three years. The series is in its seventh season. She will star in this month’s comedy film “Authors Anonymous.”

Sweeting, 26, is a professional tennis player. The two were married in December.

Cuoco-Sweeting bought the property in 2010 for $2.4 million.

Stephanie Vitacco of Keller Williams is the listing agent.

Packing up in Bel-Air

Sarah Michelle Gellar and her husband, Freddie Prinze Jr., have listed their home in Bel-Air at $5.499 million.

The traditional-style house, built in 1991, features a gym, an office, a sun room, five bedrooms and 4.5 bathrooms within its 7,620 square feet of living space.