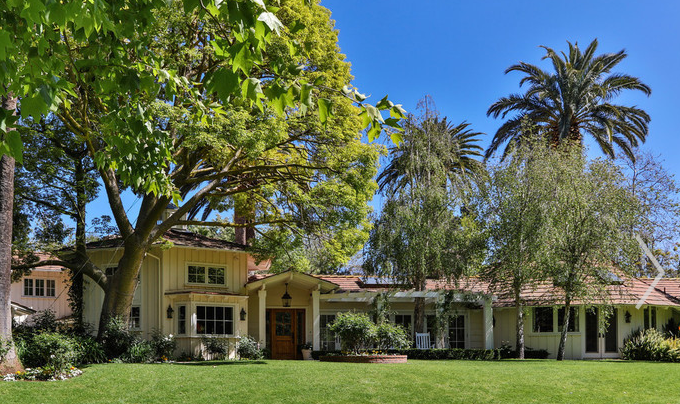 Mr. Gowers, 76, is a British TV director and producer whose credits include putting on numerous awards shows and musical specials for stars including Michael Jackson, Paul McCartney, The Rolling Stones and Britney Spears. The producer’s property, dubbed Silver Raven Farms, first hit the market last year for close to $15 million before getting a small price cut, and is now selling for $14.45 million, according to listing records.

Mr. Gowers and his family have lived on the estate, which includes a pool, barn, riding rings and several guest houses, since 2000, when Mr. Gowers and his wife, “Kidsongs” producer Carol Rosenstein, purchased it for roughly $3.8 million, according to property records.

They took the main house on Bonsall Drive down to the studs for a complete renovation that included installing custom cabinets in the kitchen and walnut flooring throughout, said listing agent Ellen Francisco of Coldwell Banker Residential Brokerage.

The 6,000-square-foot main house has a large master suite with its own sitting room and a large family media and game room, according to the listing. Images of the home show vaulted ceilings with exposed beams, fireplaces and skylights throughout.

In addition to equestrian facilities, where the family still keeps retired hunter and jumper horses, the grounds have vegetable gardens and fruit trees.

“It’s unusual to find a pool, tennis court, barn, riding arena and three guest houses on one property,” she added. “It’s a couple of blocks from the ocean and it’s close to riding and hiking trails.”

Bonsall Drive ends at the Zuma Canyon Trailhead, part of a national park in the Santa Monica Mountains. At the other end of Bonsall Drive is Zuma Beach and the Pacific Ocean.

Mr. Gowers and Ms. Rosenstein said they had searched for years for a way to bring their horses and their work closer together, according to a previous interview with the couple in The Wall Street Journal.

“We had offices in Brentwood and horses in Calabasas and we thought we’d get one facility with everything under the same roof,” the Emmy-winning director said at the time.

But with their children out of the house, the sellers no longer need all of the space, Ms. Francisco said.