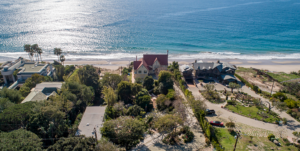 The Malibu, Calif., estate of Welsh-born Tinseltown treasure Sir Anthony Hopkins has come up for sale, listing at $11.5 million. Tax records and other online documentation show the 1992 Oscar winning “Silence of the Lambs” star, who as subsequently been nominated for four more Oscars, most recently earlier this year for “The Two Popes,” has owned the Point Dume property since 2001 when it was acquired for around $3.8 million.

The traditional residence, which somewhat resembles an English manor house with dormered windows popping out of the brick-red roof, is hidden away behind stone-pillared gates on a high bluff above popular Zuma Beach. There isn’t direct, private access to the beach below, as a lucky few of the neighboring properties have, but the handsomely unassuming two-story home offers unimpeded and expensively panoramic ocean, coastline and sunset views. Built in the 1950s, the roughly 4,000-square-foot spread contains five bedrooms and five bathrooms. There are two fireplaces, one in the spacious living room, and a sauna in the master suite, which also features a wall of ocean-view windows. The back of the house opens to a couple of curvaceous decks that step down to a lush lawn that stretches out to the bluff’s perilously steep edge, and the slightly more than one-acre grounds additionally offer tree-shaded gardens, a large motor court and a couple of outbuildings, including what listing descriptions describe as an “art room” housed in a poolside cabana.

In late 2016, property records indicate Hopkins and his wife, Stella Hopkins, dropped $1.1 million on a two-bedroom and two-bathroom condo in downtown Pacific Palisades. A couple of years later, in late 2018, they shelled out $6.6 million for a brand-spanking-new contemporary residence in one of Pacific Palisades’ most coveted neighborhoods and then, in early in 2019, they ponied up another $6 million for the vintage 1940s Colonial next door.