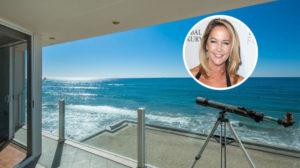 Erin Murphy, known to syndicated TV watchers around the world as the nose-twinkling toddler-witch Tabitha on the classic 1960s and ‘70s sitcom “Bewitched,” splashed out $2.3 million for an ocean-front condo at the 24-hour guard-gated Malibu Bay Club in the semi-remote western reaches of Malibu, California. Remodeled about five years ago in a “Hamptons style,” according to listing details, the multi-story condo has bead board accented chalk-white walls, refinished hardwood floors and spectacular southwestern sunset views. There are two bedrooms and 2.5-bathrooms in 1,934 square feet over three floors.

Entrance to the condo is on the top level where, in addition to a two-car carport, open plan living spaces include a roomy kitchen topped by a trio of skylights and arranged around a center island with black granite countertops, fresh white cabinetry and average quality stainless steel appliances. The adjoining combination living and dining room is complete with fireplace and three-sets of floor to-ceiling glass sliders that open the room to a slender, glass railed terrace that spans the full width of the condo with unimpeded views up and down the wave-tossed coastline. The comfortably spacious master suite occupies the middle floor with a sitting area, built-in entertainment unit, fitted walk-in closet and updated bathroom while the en suite guest bedroom is tucked down on the lowest level where it opens to a semi-private, ocean-front patio.

Murphy, who raised alpacas on a ten-acre spread in Santa Clarita, Calif., that she called Tranquil Veranda Ranch and that appears to have been sold in early 2017 for $1.35 million, has spent most of her adult life largely out of the Hollywood spotlight raising six children. However, in 2008 she appeared on “Hulk Hogan’s Celebrity Championship Wrestling” series, a few years later she popped up as a contestant on “RuPaul’s Drag U,” and last year she appeared with a handful of other iconic stars from the early 1970s, including Dawn Wells (Mary Ann on “Gilligan’s Island”) and Alison Arngrim (Nellie Oleson on “Little House on the Prairie”), on the charming if little-watched online series “Life Interrupted.”