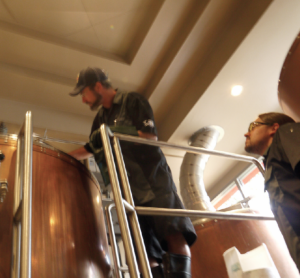 By Elano Pizzicarola / Special to The Malibu Times

In May 2011, the longtime Agoura hotspot Moz Buddha Lounge shuttered. Business was dwindling at a time when the craft beer trend was just taking off. Founder and chef Moez Megji witnessed the phenomenon first-hand as the Ladyface brewhouse set up shop about a mile down the street. So Megji decided to transform his space on Agoura Road into a brewery, hoping to revive business. Even before he pulled the plug on the Buddha Lounge, he had assembled a team of four, including himself, to lead his new venture. Megji would handle food, Brewmaster Roger Bott would take on beer and live music duties, while two others would execute the marketing and accounting.

“[Megji] saw beer as one of the new, hipper trends coming up,”says Bott, whose nickname is “Dr. Hops.” That November, Megji’s efforts materialized when The Lab Brewing Company, now nearing its one year anniversary, opened its doors. A visit inside reveals a bar area adorned by tea light candles, each sitting on a bed of grain in a miniature beaker.

In the corner of the bar area is where the beer is made. Brewing tanks loom behind a tall glass enclosure, which allows customers to watch the staff carry out the preparation and the cleaning. As brewmaster, Bott can be seen hosing down the floor in rubber boots and a barley-smeared shirt. The entire brewing process takes place on-location, just up the road from the town’s other brewery. Bott knew the higher-ups at Ladyface before The Lab launched, so the two establishments remain friendly. This sudden proliferation of breweries has been a boon to Agoura, he believes. “I think now, it’s actually a healthy competition that brings more focus to the area as a whole,” he says. And it has. The Lab has already scored write-ups in the Los Angeles Times and beer connoisseurs’ personal blogs, less than a year after opening in a town that Angelenos don’t normally associate with brewing.

The thumbs up from beer lovers should come as no surprise. Bott joined the The Lab with 18 years of experience of brewing beer in his backyard in his hometown of Camarillo.

Many of the house beers got their inspiration from the ones Bott has made over the years, including seasonal brews. Recently, The Lab marked the beginning of fall by featuring its “Hotter Than Hefe,” a Bavarian-style hefeweizen. Bott chose to keep it light-bodied and drinkable for the scorching temperatures that have dragged on. In mid- November, The Lab will roll out heavier beers, such as its double IPA, and a milk sugar stout. When it comes to customer favorites, popular house brews include the aptly named “Take Her Home Tripel,” packing almost 11 percent alcohol by volume. But The Lab eases the alcohol punch by sweetening the beer with coriander and orange peel. For those needing to absorb that alcohol, The Lab aims to redefine bar food. Chef Megji strives for top-notch ingredients in not just their burger, made with sirloin and kobe beef, but even basics like the barbecue duck quesadillas. Bott attributes this commitment to Megji holding a venerable reputation in the local food scene by running the popular, high-end restaurant Fins. This lets Bott, when not coordinating music, follow his beer-making passion. True to his “Dr. Hops” persona, Bott marvels at the limitless variations of ingredients, and takes joy in unveiling his concoctions to customers. “There’s like over 100 different types of grain. Over 100 different types of hops, probably 70 or 80 different types of yeast,” he says. “It’s cool to be able to share that art.”