A 225-acre estate in Malibu, California, with Pacific Ocean and mountain views has hit the market for $18 million.

The property has been the home of author, chef and restaurateur Geraldine Gilliland, owner of the Santa Monica restaurant Lula Cocina Mexicana, for more than 25 years.

“From the first moment I walked onto the property in 1995, I knew this was it, a spiritual magical place, and it’s never failed me,” she said in an email.

Dubbed Rancho Chiquita, the property has been a venue for weddings and other events, and has been used as a venue by the television show “The Voice”. The lawn can accommodate up to 250 guests.
The property was also once a sanctuary for rescued dogs as part of Chiquita’s Friends, which Ms. Gilliland founded in 2011. The nonprofit has since found other accommodations for the animals.

Ms. Gilliland, a native of Ireland, started off with a 40-acre plot. It came with what is now the guest house, plus plans and permits to expand. With his help, she acquired the acreage she has today.

“It’s really hard to find this many contiguous acres now,” her agent said. “Once you get through the gates, you’re in your own little world.” 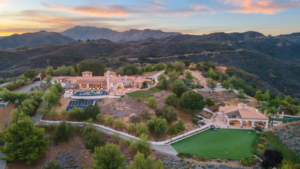 Located near the Santa Monica Mountains National Recreation Area, the state even asked Ms. Gilliland to sell back about 80 acres at one point.

The property was also once a sanctuary for rescued dogs as part of Chiquita’s Friends, which Ms. Gilliland founded in 2011. The nonprofit has since found other accommodations for the animals.

The residences are inspired by Mexico, and the main home is built in a hacienda style, with five bedrooms and five bathrooms, according to the listing. Beamed ceilings, woodwork and tiles can be found throughout the home.

No surprise, there’s a chef’s kitchen with bright tiling, an island with built-in wine storage, dual ovens and a breakfast nook with views of the ocean, according to the listing. There’s also a full outdoor kitchen adjacent to the pool and spa.

The owner’s wing features a primary bedroom with a fireplace, terrace with a view and spa, an office and a bedroom loft. There’s also a walled sanctuary garden where “you can be outside and no one can see you,” the agent said.

There’s also a guest wing with two additional bedrooms that have access to a private palapa—an open-air shelter with a grass roof—and a guest house that was actually the original home on the property, according to the agent.

Another unique feature on the land is a building once occupied by the telecommunications company Charter Communications. It could be used for a recording studio or even as headquarters to mine cryptocurrency.

For all it’s privacy, the property is still accessible to more central areas, including Santa Monica where Ms. Gilliland has her restaurant.