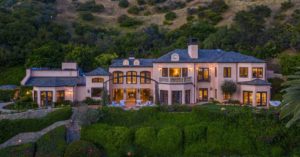 The 7,814-square-foot house, which is in Malibu’s prestigious Serra Retreat, a gated community known to attract celebrities, was put up for sale earlier this month.

According to People, the “Frasier” actor and the reality star purchased the property in 1998 for $4.5 million, a year after they wed. The sprawling French country-inspired estate was featured heavily on the first two seasons of Bravo’s “Real Housewives.”

The couple finalized their divorce in 2011, and the property was sold for roughly $13 million in 2015, according to the Los Angeles Times. It has been on and off the market ever since.

The estate’s gourmet kitchen was designed by famed chef and restaurateur Wolfgang Puck, and includes a climate-controlled wine cellar.

Outside, the property has a resort-style swimming pool, a bathhouse and two outdoor spas. There is also a tennis court with a viewing terrace, a barbecue area with a fireplace, an organic vegetable garden and fruit orchard and a horse riding ring, a carriage house and a six-stall equestrian barn.