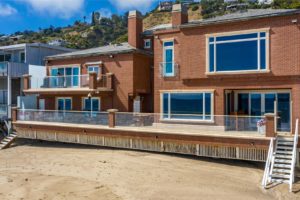 A few months after her former home shattered a California record by selling for $119.75 million, Candy Spelling is making waves in the real estate scene once more. Her waterfront mansion in Malibu just hit the market for $23 million.

Spelling shared the home for decades with her husband, prolific TV producer Aaron Spelling, until his death in 2006.

Enjoying 81 feet of water frontage on La Costa Beach, the brick-clad abode offers a markedly different feel than its coastal neighbors. Past a stately courtyard entry, it opens to more than 8,000 square feet of interiors.

Limestone floors and crown molding adorn the living and dining room, and the center-island kitchen adds rich wood cabinetry and granite countertops. Throughout the home, picture windows frame views of the ocean.

The family room tacks on beamed ceilings and a wet bar. Blackout curtains and a projector turn the space into a screening room.

Of the seven bedrooms, two are master suites. One features glass walls and a fireplace, and the other expands to a private balcony. Elsewhere are two offices and a bonus room.

Out back, a patio spans the length of the home. In addition to covered lounges and dining areas, the waterfront space holds an outdoor shower and two staircases that descend to the sand.

Spelling, 74, is an author, theater producer and philanthropist. Her autobiography, “Stories from Candyland,” made the New York Times Best Seller list. Multiple plays she produced, including “The Color Purple” and “Nice Work If You Can Get It,” won Tony Awards.

Her former home, The Manor in Holmby Hills, is one of the most iconic estates in L.A. County. Nicknamed “Candyland” during the Spellings’ reign, the W-shaped chateau is larger than the White House, clocking in at 56,500 square feet.

It introduced extravagance unrivaled at the time: more than 20 customized rooms including a flower-cutting room, a humidity-controlled silver storage room, a barbershop and multiple gift-wrapping rooms.

Spelling sold it to Petra Ecclestone, daughter of Formula One billionaire Bernie Ecclestone, for $85 million in an all-cash deal in 2011. Then this summer, Ecclestone sold it for $119.75 million in the priciest home sale in California history, edging out a neoclassical-style mansion in the affluent Silicon Valley community of Woodside that traded hands for $117.5 million six years ago.