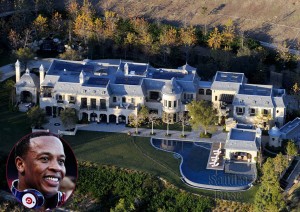 Rap musician and producer Dr. Dre shelled out $40 million for Tom Brady and Gisele Bundchen‘s Brentwood, CA. mansion, according to published reports. The New England Patriots quarterback and his supermodel wife plan to move into their new custom digs in the Boston area. The home was originally listed for $50 million, but Dre negotiated a steep discount. The couple spent $11.75 million for the land and had the mansion built to their specifications by architect Richard Landry. The Los Angeles Times reported that “the sale became official today, with Dr. Dre spending some of the money he received in the $3 billion sale of Beats Electronics to Apple.”. The 13,890 square foot mansion boasts 4 bedrooms, 5 baths, a center hall, a library/study, a gym, and a sauna. The four acres of grounds contain waterfalls, ponds, an infinity pool, gardens and pathways and a moat that runs alongside the mansion.