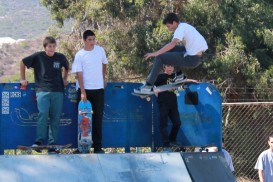 Two areas on southern edge of Bluffs Park to be discussed Tuesday at Malibu City Hall. Malibu has been without a skate park since Papa Jack’s closed in 2011.

By Knowles Adkisson / The Malibu Times

Local residents will get a chance to see the location of a proposed permanent skate park in Malibu on Tuesday at Malibu City Hall.

Skatepark design consultant Zach Wormhoudt will give a presentation on the work before the city’s Parks and Recreation Commission at its regular meeting Tuesday at 6:30 p.m. Wormhoudt’s company, Wormhoudt, Inc., has prepared a feasibility study (see attached, left) recommending two proposed sites in Malibu Bluffs Park. Both of the sites are located on the southernmost edge of the park over looking Malibu Road.

The first site, referred to as “the most desirable,” is a triangular space overlooking the bluff, sandwiched between the main soccer field and the pony league baseball field.

The study cites this location as “the least likely site to have potential impacts on adjacent off-site uses” and that construction on the site would likely have the least amount of impact on nearby environmentally sensitive habitat areas (ESHA).

Drawbacks for the site include the need to relocate or design around an existing Oak tree and play structure, limited visual access for enforcement purposes and potential space limitations.

The second site is a 10,000-square-foot parcel at the south end of the soccer field adjacent to a scenic overlook.

The site has “good potential for being developed with minimal impacts” to ESHA and is unlikely to impact adjacent off-site uses, the study reports. Disadvantages of the site include potentially having to relocate an existing sand area, potential space limitations from the adjacent multi-use field, exposure to debris from trees on the site’s northwest boundary and limited visual access for enforcement purposes.

Four other sites were also considered and given lower grades than these sites.

Whichever site is chosen, the skate park will be designed for users of all ages and skill levels, and will be compatible with bicycles, skateboards, in-line skates and scooters. The skate park would operate during the same hours as Malibu Bluffs Park, which is 10 a.m. to 5 p.m. daily.

The park will be primarily designed for daily walk-on use, but it could also be used for city-sponsored classes, and will also be designed to accommodate special events such as demonstrations and competitions, the study says.

The average age of expected skate park users is 14 years old, which makes the need for parking “a bit different than most recreational facilities,” according to the study. Most users will be reliant on public transportation, parents, friends and their own skateboard or bicycle for transportation to the park.

Therefore, “an over abundance of parking is less important than efficient and safe pick up and drop off areas,” the study states.

Another consideration the study took into account is “the mesmerizing dynamic that skating and bicycling have on the spectator.”

“Very often people who are not users of the skate park or who do not know anyone using the skate park will spend hours watching the endless cycle of tricks being performed,” the study states. “For many participants, watching friends and more experienced athletes is an integral part of the sport’s culture. In either case, providing spectators with seating options directly influences the success of the park.”

Some support buildings will need to be added, such as restrooms. Other potential structures include “check-in, concessions, equipment storage and pro-shops buildings.”

Structural maintenance for the park is not predicted, according to the report, although daily trash receptacle clearance and restroom cleaning will be required. A water source will also be required for periodic washing of the park.

Malibu has been without a skate park since Papa Jacks Skate Park closed in October 2011 due to plans to build a Whole Foods store on the grounds. Attempts to use the parking lot of Bluffs Park as a temporary skate park were frustrated by disagreements with the Santa Monica Mountains Conservancy, and the city in March ruled out the option of a temporary park.