Council to Elect New Mayor at Next Meeting 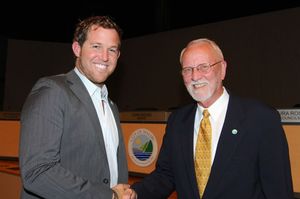 The City Council is poised for reorganization in the new year, with Council scheduled to elect the next mayor when it meets again on Jan. 12, 2015.
Outgoing Mayor Skylar Peak has held the position since he was sworn in as Malibu’s youngest mayor at a March Council meeting. Traditionally, the mayor pro-tem ascends to the seat of mayor, meaning current Mayor Pro Tem John Sibert, will likely become mayor when votes are cast in January.

All current Malibu Council Members have now served at least one term as mayor.