Creator and Writer of CSI listed his home in Malibu. 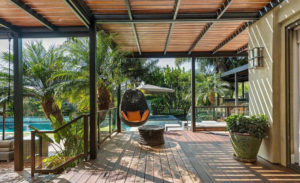 Anthony Zuiker, creator, writer and producer of all four versions of the enormously successful “CSI: Crime Scene Investigation” franchise, has listed a Malibu, Calif., estate at $9.45 million. The three-time Emmy nominee purchased the property in May of 2012 for $7.5 million from construction manager Judd Abrams and telegenic contractor, style maven and high-end house flipper Nicole Sassaman. Squirreled privately near the end of a discreetly swank, semi-private lane in the rolling foothills above the Pacific Coast Highway and completely encircled by an impenetrable hedgerow and dense rows of mature trees, the two-story contemporary sits behind gates on 1.4 fully landscaped acres with five bedrooms and five bathrooms in about 5,500 square feet, plus a detached guesthouse.

Built in 1990 in a blandly forgettable, modern-minded version of a white-stucco Mediterranean villa with a clay tile roof, the residence was later and thoroughly transformed to an assertive if somewhat awkwardly massed, concrete-skinned contemporary enveloped in an opulent display of tropical plantings. Comfortably sumptuous interiors are expensively finished with polished walnut floorboards and decked out with a bevy of high-tech amenities such as an integrated whole-house speaker system.

Film Producer Gary Gilbert Makes Off-Market Deal for Beverly Hills Mansion
A double-height foyer steps down to an unusually and interestingly bullet-shaped living room with a simply adorned fireplace and cinematically long, semi-circular wall of windows while the dining room opens to a shaded deck that wraps along the backside of the house and incorporates a variety of lounging and dining options as well as an outdoor kitchen and grilling station. Clean lined and extensively equipped with commercial-style designer stainless steel appliances, the unquestionably high-end if otherwise fairly generic center island kitchen opens over a peninsula snack bar to combination dining area and family room with a TV-surmounted linear fireplace and several sets of accordion folding doors to the backyard.

A main floor bedroom is suitable for guests or staff and three additional guest bedrooms on the second floor are joined by a master suite that, in addition to ample closet space and a spacious bathroom with an ocean-view garden tub, is replete with a vaulted ceiling, a minimalist fireplace, a raised lounge/office area and a bank of floor-to-ceiling windows that fold open to a slim deck with a through-the-palm-trees glimpse of the ocean.

Lush, carefully manicured grounds include a spacious motor court, verdant sweeps of drought-busting faux-grass and a tile-accented swimming pool and spa beside an open-air pavilion with a kitchenette/bar. An elevated, ocean-view deck with a linear fire pit and retractable canvas sunshades stands between the swimming pool and a lighted tennis court. Under the deck, a gym and guesthouse will sleep 14 people in two rooms that include a kitchenette, numerous day beds, multiple televisions and a nightclub-style lighting system.

In the turbulent wake of a contentious split and costly 2012 divorce from his first wife, Zuiker, who re-married in 2013, took a heart-stopping $2.45 million loss, not counting carrying costs, improvement expenses and real estate fees, on a six-bedroom and six-bathroom East Coast-inspired quasi-Colonial in the Brentwood area of Los Angeles that was acquired in 2008 for $9.35 million from high-powered talent manager Rick Yorn and sold in 2012 for $6.9 million.