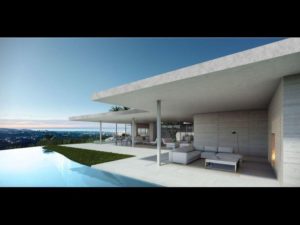 Billionaire entertainment executive David Geffen owns plenty of great real estate, but his most recent purchase undoubtedly takes his portfolio to the next level. According to the Los Angeles Times, Geffen recently paid $30 million for an empty one-acre lot nestled in an exclusive enclave of the Trousdale Estates neighborhood of Beverly Hills known as Billionaires’ Row.

In renderings obtained by the Times, architectural firm Shubin Donaldson imagines an ultramodern seven-bedroom, 14-bathroom spread which could be built on the property, with entire walls made of floor-to-ceiling glass, numerous outdoor terraces surrounding the home, and an impressive 140-foot free-form infinity pool wrapping around the house like a moat. The interiors would include loads of skylights, including a massive one above the combination dining-living room, which would have a sleek modern fireplace flanked by two live trees. A floating staircase would connect the two floors of the dwelling.

The mock-ups also hint at some of the home’s luxurious entertainment offerings, including a bowling alley, nightclub, bar, theater, salon, wellness center, and gym. While it’s unclear exactly what Geffen plans to do with the land, any house he builds is sure to have unobstructed views of downtown Los Angeles and the Pacific Ocean. And he should have no shortage of famous friends to invite over to his future abode, including his new neighbors. Among them are billionaire Minecraft creator Markus Perrson and businessman Evan Metropoulos, who paid $65 million for a nearby home last year.