Just as we first heard from an anonymous snitch who said it soon would be and as was first sussed out by the intrepid celebrity property gossips at the Los Angeles Times, Denise Richards has put a vigorously glammified mansion in the guard-gated and celeb-approved Hidden Hills enclave in L.A.’s far western suburbs up for grabs on the open market with an asking price of $7.749 million. Although she hasn’t occupied the premises in question for the quite some time as it underwent its recent renovation and expansion, the former Playboy model, occasional actress and former reality star who — not doubt much to her own chagrin — is probably best known for being previously married to and procreative with (in)famously erratic but more recently contrite actor Charlie Sheen, has owned the property since August 2007, when she snatched it up for $4.395 million. (In case any of the children might be curious, the lushly buxom and always admirably self-deprecating Miz Richards has been shacked up with her daughters in a 9,000-plus-square-foot mock-Med manse in the guard-gated Mulholland Estates enclave in the mountains between Beverly Hills and Sherman Oaks that her ex-husband bought from veteran film and television executive-producer Mike Medavoy in late 2011 for $7 million.)

Miz Richards first attempted to sell her 1.14-acre Hidden Hills mini-estate not even a year after she first acquired it: It popped up for sale in June 2008 at $4.25 million, a $145,000 loss not counting carrying costs, improvements or real estate fees. The asking price was repeatedly lowered, and in June 2010, when it was last taken off the market, it had a pricetag of just $3.299 million. At that point Miz Richards decided that rather than dump the place at a punishing loss of well over a million bucks, she’d give it a multiyear and no-doubt multimillion-dollar expansion and overhaul that ballooned the 5,651-square-foot house to its current size of 8,284 square feet with six bedrooms and six full and two half bathrooms.

Thought it may look like a large and well maintained if pretty standard and architecturally unremarkable Hidden Hills mansion on the outside, the interior spaces are decidedly more decoratively conspicuous. The double height entry has white marble floor tiles, a glistening Mother of Pearl wall treatment, a slightly curved staircase with sassy cheetah print carpeting and a fashionable and probably terrifically expensive Atlantis chandelier. The foyer is flanked by a one of the mansion’s two home offices and a “formal” living room that clearly wasn’t dressed with quiet, dignified nights at home in mind. Indeed, the black-walled room would seem to this sometimes snarky property gossip to have more in common with the VIP lounge of an upscale strip club than what most people would consider the “formal” living room of a $7.5 million suburban mansion. In addition to a moody, backlit onyx fireplace and a plethora of tufted banquettes — two of them covered in lurid white leather — the high-ceilinged space has a glitzy couple of black crystal chandeliers, half a dozen mirror-topped cocktail tables sprinkled among the various seating groups, and a rather theatrical, crystal-festooned and also backlit freestanding bar. A discreet corridor extends from the foyer, past a downright dizzying black and silver powder room and what online marketing materials call a “tasting room” outfitted with a pair of glass-fronted, temperature controlled and — you got it, butter beans! — backlit wine storage walls before it arrives at a regally aspiring silver and purple formal dining room that easily seats 10 and opens through glass doors to a small courtyard that in turn gives way to the plushly landscaped backyard.

Less histrionically furnished family spaces include a family room/media lounge with more built-in banquette seating plus a built-in entertainment wall. An informal dining area with coffee bar nook connects the family room to the sun-flooded kitchen, where there are vaulted ceilings, a massive arched wall of windows behind the sink, a built-in pizza oven and all the high-grade appliances that one can expect to find in a newly rehabbed kitchen of a multimillion-dollar mansion. A somewhat unusual, U-shaped center island has a vegetable/bar sink and a four-stool snack counter. A separate wing on the main floor, which has a secondary and also cheetah-print carpeted staircase to the upper level bedrooms, contains a generous en suite guest bedroom set across the hall from a frumpily furnished staff bedroom with attached bathroom. A long, L-shaped hallway leads to a second home office with even more built-in banquet seating as well as a roomy laundry room and, not surprisingly given Miz Richard’s magnanimous propensity towards animal rescue and ownership, a chandelier-lit pet hotel with vaulted ceiling, half a dozen custom kennels and direct access to an enclosed dog run.

Three en suite guest/family bedrooms — one with private sitting nook — occupy one wing of the upper floor while the monochromatic, nude and pale champagne toned master suite commands another and offers two sitting areas and a decent sized but hardly huge bathroom with silver brocade pattern wallpaper, double sink vanity, free-standing standing claw footed tub and a separate steam shower. Just past a marble-countered breakfast bar that has some sort of shimmery wall covering, a spacious, silver-walled walk-in closet and dressing room is custom fitted with a bevy of built-in wardrobes, dressers and shoe racks as well as a built-in hair and make-up station and a couple of velvet tufted built-in banquettes on either side of a (gas) fireplace trimmed in some sort of glossy black stone material.

Easy breezy outdoor living is comfortably accommodated in an 800-square-foot open-air cabana that overlooks the manicured grounds and includes a commodious lounge area with fireplace — not to mention built-in banquette seating, a spacious dining space and a fully equipped kitchen and barbecue setup. A resort-style swimming pool complex won’t likely curry much goodwill with water conservationists as it incorporates not just one but two side-by-side lagoon-style swimming pools, a shallow one for the kiddies and a deeper one for grown-ups. The pools back up to a man-made, bluff-like tumble of boulders and features numerous waterfalls, a beach entry and a partially submerged sunbathing shelf, an integrated slide and — no one should be the least bit shocked — a spa grotto with fire pit.

As longtime celebrity real estate watchers already know this is not the first house in Hidden Hills Miz Richards has owned. In May 2006 she shelled out $4 million for a large residence that’s all but directly across the street from the one she’s currently got up for sale. She sold the first Hidden Hills house— at a $200,000 loss not counting upkeep, improvements and real estate fees — in October 2007 for $3.8 million and, interestingly enough and apropos of nothing, the buyers sold the property two years later at an even bigger loss, for $3.125 million. We can’t claim any inside intel on Miz Richards’ future real estate plans but, so the Internet scuttlebutt goes, she’s on the hunt for a new home in Santa Monica, Pacific Palisades or Malibu. 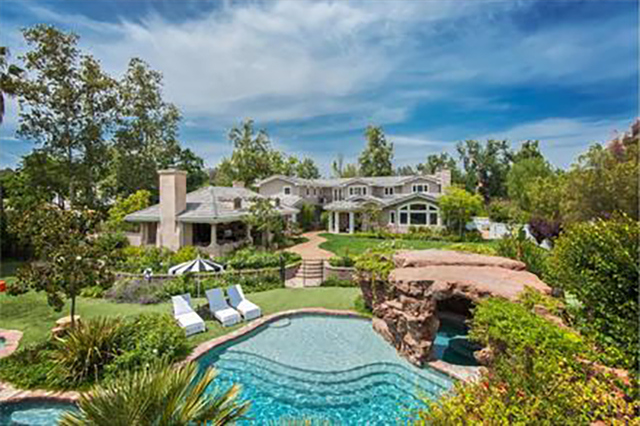 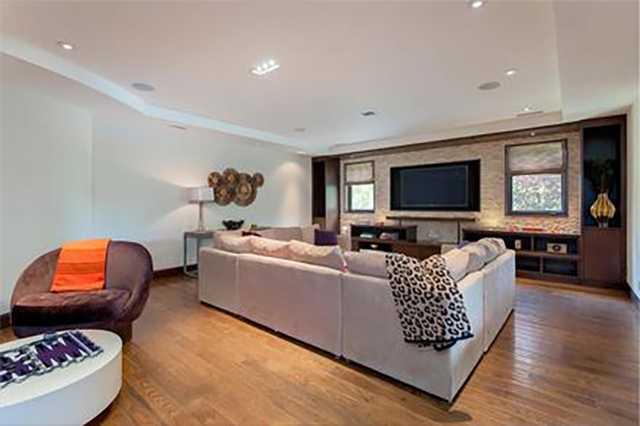 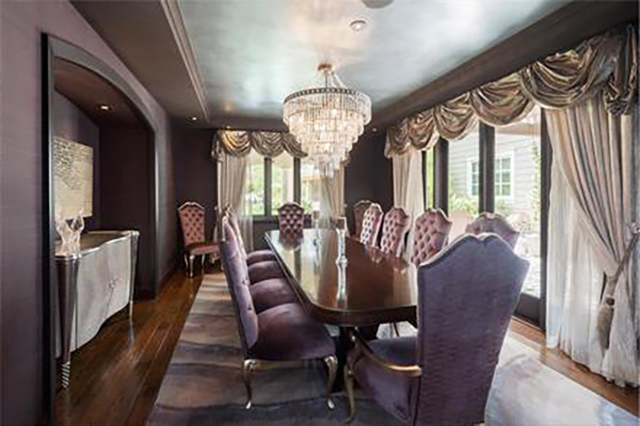 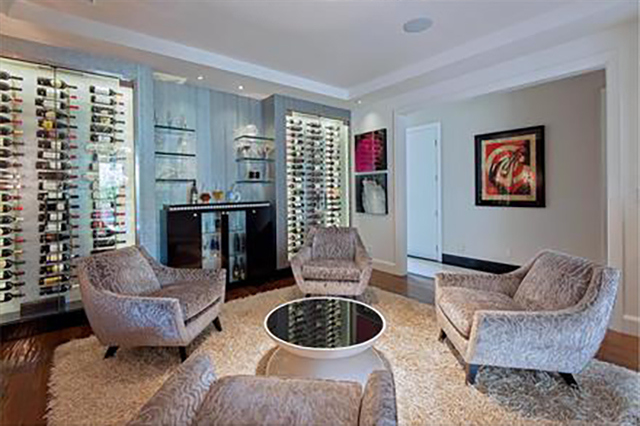 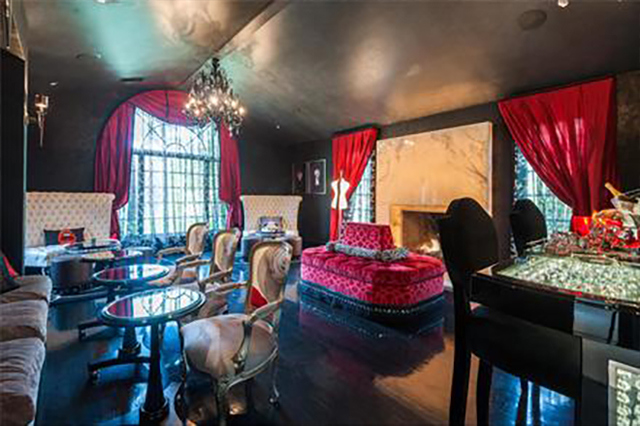 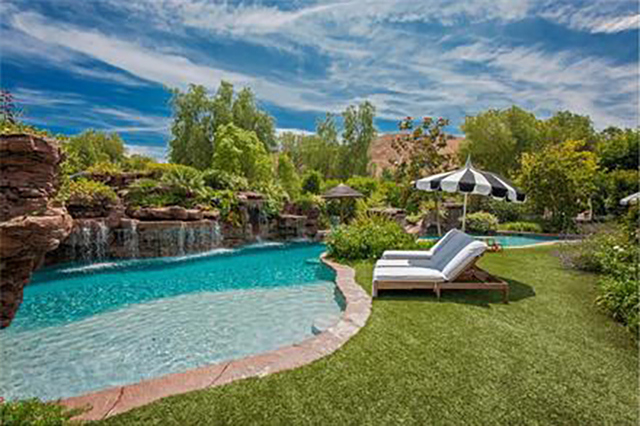 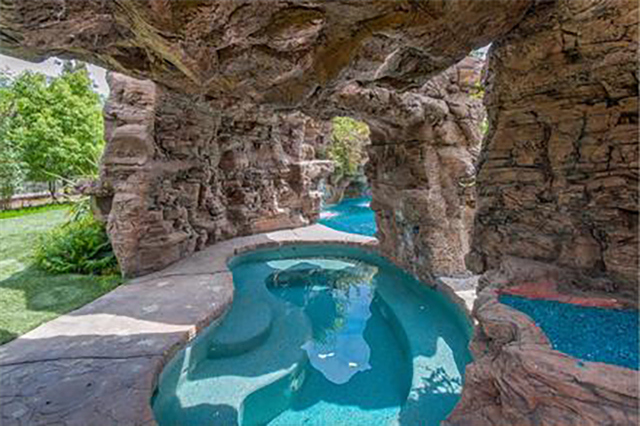