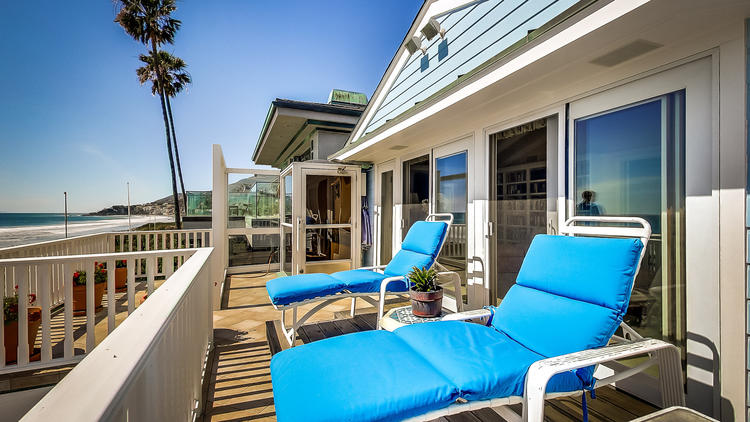 In Malibu’s Broad Beach section, the longtime home of actress and pinup model Dolly Read and her late husband, comedian Dick Martin, has returned to market for $9.4 million.

The Cape Cod-style house, built in 1946, makes the most of its location on Malibu’s western end with multiple balconies and a wood-plank walkway that leads directly to the sand. Views from the property are unobstructed and extend up and down the coastline.

The main house features open-beam ceilings, brick fireplaces, a cook’s kitchen and a wine cellar on the main floor. The master suite occupies the second level and has a sitting area, his-and-hers bathrooms and doors that open to a private deck.

A courtyard containing various fountains and mature fruit trees sits between the main house and guest house, which has its own kitchen and private deck. Combined, the two residences offer nearly 4,700 square feet of living space.

The property, sitting on about a third of an acre, also has a three-car garage. Jack Pritchett of Pritchett-Rapf & Associates holds the listing.

Read, 72, starred in the 1970 film “Beyond the Valley of the Dolls” and appeared on several television series, including “Charlie’s Angels” and “Fantasy Island.” She was Playboy magazine’s Playmate of the Month in May 1966.

The Malibu property has been her home for the past four decades, Read told The Times last year.