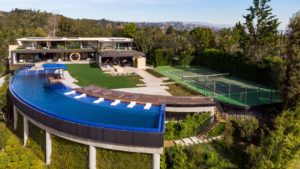 There are plenty of mega-mansions sitting on the market in California, but in the past year, none of them had sold for more than $35 million—until now. It was just revealed that a Saudi Arabian prince is suspected to have dropped $52.2 million on a Bel Air compound with two homes, marking California’s biggest residential deal of 2019.

Though the buyer remains unnamed, the homes were purchased by a tax attorney who manages the financial affairs of the Al Saud royal family, including the late King Fahd himself. It was that detail, reported by the Wall Street Journal, that led experts to agree it must be a Saudi prince.

So, why does this place command such a high price? Well, for starters, the fact that there are two adjoining properties on the 1.7-acre estate. The first, an ultramodern home which took four years to build, cost $45 million.

Spanning over 20,000 square feet, the house features seven bedroom suites, a gym, a spa, a 12-car garage, a wine room, and a 20-seat movie theater. The design is a mix of steel, glass, and concrete, making for a very minimalistic vibe. Nearly every spot in the dwelling offers views of the Century City skyline, the Pacific Ocean, and even Catalina Island. Of course, the outside is just as impressive. The backyard has several gardens and lawns, patios, a full-size tennis court, and a 250-foot infinity pool.

The other home, which sold for $7.2 million, sits just below the main house and was built in 1954 by architect Richard Neutra. Much of the midcentury style remains intact, though it’s been “updated and expanded,” according to the listing. Presumably, it’s here where the staff for the prince will reside, if he is in fact the buyer.