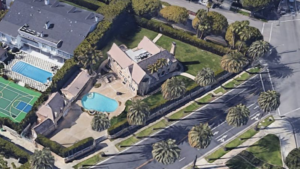 President Trump has visited California three times since entering the White House, but he’ll have one less place to stay for the next trip. The Trump Organization has quietly unloaded one of its last two properties in Los Angeles County, a Tudor-style home in Beverly Hills, for $13.5 million in an off-market sale.
The company bought the home for $7 million in 2007, when it was controlled by Trump. It’s now run by his two sons, Eric and Donald Trump Jr.

A corporate entity — Hillcrest Asia Limited — is the buyer, real estate records show.
Built in 1927, the two-story home sits across from the Beverly Hills Hotel and Will Rogers Memorial Park on North Canon Drive. It has five bedrooms and six bathrooms across 5,395 square feet, and the 0.67-acre grounds expand to a hedged lawn and swimming pool out back.

The house previously sported a dark gray color but was painted orange during Trump’s ownership, according to sources familiar with the property.

The corner-lot estate sits at the intersection of Sunset Boulevard, Rodeo Drive and Canon Drive — a hot spot for Trump. In addition to frequenting the Beverly Hills Hotel over the years, he previously owned a Greek Revival-inspired mansion on a neighboring lot that he sold in 2009 at an $850,000 loss.
The value of the property on North Canon Drive has been a point of interest over the years. In 2016, Trump’s tax attorney Wade E. Norwood argued the home was worth $6 million — less than half of the price it just sold for. Following the appeal, the county’s assessment board valued the estate at $6.004 million, according to L.A. County records.

It’s not the first time Norwood has made such a case.

In 2002, Trump shelled out $27 million for a golf course in Rancho Palos Verdes overlooking the Pacific Ocean, which is now known as the Trump National Golf Club Los Angeles. He said he spent nearly $300 million restoring the 300-acre property, including repairing the 18th hole, which slipped into the ocean after a landslide in 1999 and drove the previous owners into bankruptcy.

Following the renovations, Norwood claimed the course was worth $10 million.

As first reported by the Real Deal, the sale of the North Canon Drive home leaves the Trump National Golf Club in Rancho Palos Verdes as Trump’s only remaining property in the L.A. area.