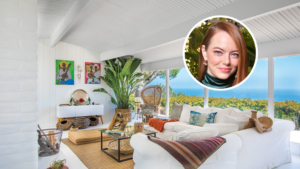 A-list actress Emma Stone, 30, paid $3.25 million for a renovated midcentury ranch-style house directly overlooking Las Tunas Beach, according to Variety, Architectural Digest and numerous other publications. The cliff-top 3.2-acre property on two parcels has 180-degree views of the Pacific. The 1,800-square-foot house is completely surrounded by old growth vegetation—native plants, large trees, cactus, bougainvillea, agave and jade; with shaded brick patios for outdoor dining. The inside of the house has white walls, lots of glass and tall ceilings.

The sellers, Mark and Stacy Rivett, featured the property in Cottages & Gardens magazine shortly before selling to Stone, and were responsible for renovating the house with the idea of retaining the original midcentury vibe. The couple bought the house from the original owners’ children.

Stone has been on a real estate buying and selling streak recently. She sold a home in Beverly Hills earlier this year, then bought not only the Malibu house for herself, but a 1920s Spanish-style cottage in Westwood for a family member. She also owns two residential properties in New York City, including one purchased just last year.

Stone won the best actress Oscar for “La La Land” (2016), and received best supporting actress nominations for “Birdman” (2014) and “The Favourite” (2018). She has been widely photographed filming, shopping and eating out at various places in Malibu since about 2015, so she apparently knew the town before buying here.