Forget the view: State-of-the-art garage sells in Malibu for $7.3M 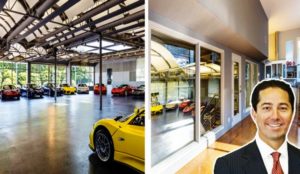 The Malibu residential market has seen some eye-popping sales over the last year. But few have involved buyers who cared more about the garage than sweeping ocean views or custom living amenities.

That was the case with a 7,000-square-foot home with just one bedroom on one acre in Point Dume that recently sold for $7.3 million, according to Yolanda’s Little Black Book.

While seemingly large, It’s not much of a home, at least not for people. But it wasn’t really designed for living — it was designed as the ultimate home for ultra-high-end motor vehicles. The majority of the home is a state-of-the-art climate and acoustically controlled garage with room for more than two dozen cars.

The buyers were Todd and Karen Blue, a couple from Kentucky who recently purchased a true 10,100-square-foot mansion in Malibu for themselves and their children. The bedroom at the garage is likely for a live-in guard, Yolanda wrote.

The Blues won’t have much trouble filling up the garage — Todd Blue is a luxury car dealer who owns around 10 dealerships around the country that sell high-end sport cars brands like Porsche and Lamborghini.

The property was the creation of Steve and Azita Goldman, who built the steel and glass facility in 2002. They seemed to have thought of everything: the garage even has dust and anti-bacterial control. Goldman called it an auto museum “on par with a hospital operating room,” according to Yolanda.

The Goldmans listed it in March for $10 million.
Add the sale to the list of impressive trades in Malibu this year, which includes the highest recorded trade in Los Angeles history — the $110 million sale of Peter Morton’s Carbon Beach pad.

The median home price in Malibu shot up 32.6 percent year-over-year to $3.4 million in the second quarter.