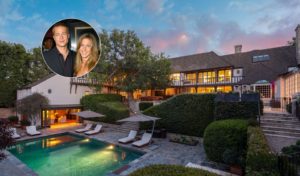 The price tag is $7 million less than the $56 million it was expected to be listed for according to an April report.

It was designed by famed Southern California architect Wallace Neff and looks from the outside as it did in 1934.

Spread across three floors, the property has a dining room that seats up to 20, a bar room with an original fireplace that converts into a projector room, an exercise room, a pool and an outdoor living area with a fireplace, according to the listing.

During their tenure they spent several years remodeling the home, which included the addition of the home’s multimillion dollar tennis court pavilion and guest house.

But despite the renovation, every room has pretty much kept its architectural integrity and the floorplan is the same as when it was built, though it’s been upgraded with all the bells and whistles.

Like the former owners, he has put his stamp on the home; like the master bedroom, which he fitted out in an Art Deco style.