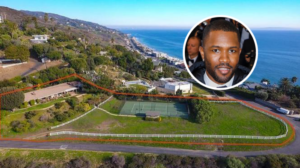 Although the deal actually went down two full years ago, way back in summer 2017, it’s only now that Grammy-winning singer/songwriter/record producer Frank Ocean’s clandestine purchase of a $6.35 million house in Malibu has first come to light. Situated off a discreet private road, on a bluff high above Pacific Coast Highway and Carbon Beach, the critically-lauded musician‘s bucolic 1.5-acre spread includes a surprisingly modest midcentury ranch house with 2,802 square feet of living space.

As it turns out, the property has a bit of a celebrity history; shortly prior to Ocean’s purchase, it was leased out to former “Real Housewives of New Jersey” cast member Dina Manzo by the non-famous family who owned the place for over 50 years.

The 1955-built house itself is invisible from the street, squirreled away behind a particularly dense layer of overgrown foliage. A blacktopped driveway slopes down to the two-car garage, which directly connects to the spacious yet perfectly ordinary home. Inside, there’s an eat-in kitchen with custom cabinetry, a carpeted dining room and a family room with oversized fireplace.

Other interior amenities include five bedrooms — the master suite outfitted with a built-in soaking tub and walk-in closet — vaulted ceilings, and rows of glass sliders leading to the outdoor patio, which sports breathtaking views of the Pacific Ocean and Catalina Island.

But the property’s real value is mostly in its impressive lot size — nearly all of the 1.5 acres are usable. Below the house itself, a secondary flat pad is currently outfitted with little more than a full-size tennis court and fenced-in grassy pasture; that space could presumably serve as the setting for a hulking new mansion.

While it remains publicly unknown what Ocean plans for his new estate, it doesn’t appear he is demolishing the existing residence. Recent aerial imagery indicates the house is being extensively renovated, with the current interiors gutted and prepped for a new layout. And earlier this year, records reveal, Ocean was slapped with a violation by the city of Malibu for remodeling his house without a permit, though it’s not clear if that conflict has since been resolved.

In any case, Ocean already has a well-documented fondness for Malibu ranch-style living. He previously leased a house on Malibu’s Point Dume from Olympic snowboarder Shaun White; that property, incidentally, is currently up for sale with a $14.5 million pricetag. 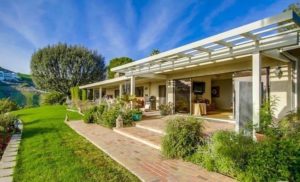