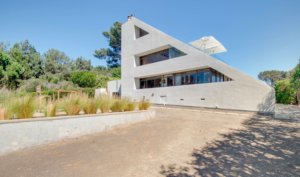 A Malibu, California, home once featured on “Star Trek: The Next Generation” has listed for $5.7 million.

The triangle-shaped house was designed by California-based architect Ellis David Gelman, who originally built the house for himself.

“Looking from the outside, it looks like a real triangle,” said Ani Dermenjian, the agent representing the property. But “when you’re inside the house, it’s high ceilings throughout no matter where you are.”

Built in 1981, the four-bedroom, 3.5-bathroom main home has a dining room, a media room, a master suite, two fireplaces, and a Sonos sound system, according to the listing, which was posted at the end of September.

The rest of the house has details such as slate tile, bamboo flooring, and glass railings throughout, according to the listing. “The colors of the materials are very neutral, so you can do a lot with it,” Ms. Dermenjian said.

Outside, there’s a garage with space for two cars, as well as a driveway with room for 10 cars.

There are separate rose and lavender gardens. The property also includes a one-room guesthouse with its own bathroom.

The home has a terrace with an ocean view. It sits on two acres of flat land, around 1.5 acres of which are usable, Ms. Dermenjian said. “You can put in a pool, you can put in a horse facility, you can do a lot with it,” she added.

The property was purchased by its current owners, Rouben and Nina Terzian, in 2007 for $4.7 million, property records show. Mr. Terzian is a toymaker who helped create toys such as My Size Barbie, and who holds multiple patents, including one for a stuffed toy dog. He was inducted in the Toy Industry Hall of Fame in 1998. He could not be reached for comment.

The house was featured in a 1989 episode of “Star Trek: The Next Generation.” In the season three episode, Captain Jean-Luc Picard and his crew go down to an abandoned planet and find two people who survived a disaster that wiped out the rest of the population. The property was used as the planet’s setting.