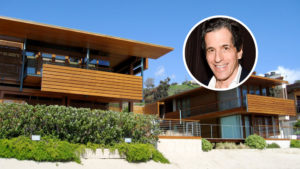 A real estate record is about to be shattered in Malibu and Los Angeles County as Hard Rock Café co-founder Peter Morton is set to part ways with his luxurious Carbon Beach estate for a whopping $110 million. The chic two-story main residence and guesthouse consists of almost 7,000 square feet. The teak-shuttered manor, designed by noted architect Richard Meier, reportedly required a full-time worker to oil the outside cladding, according to W magazine in 2006. The deal easily tops Malibu’s latest record breaker, the 2017 sale of David Geffen’s nearby Carbon Beach spread for $85 million. This previously under-the-radar transaction had Morton represented by brokers Rayni and Branden Williams of Williams & Williams Estates at Hilton and Hyland. The buyer, billionaire Michael S. Smith, was represented by Barry Peele of Sotheby’s International.

Morton has bought and sold many multi-million dollar homes in the Los Angeles area but he’s steadfastly held on to a nearly 13,500-square foot mansion set behind gates on 1.3 landscaped acres with a tennis court, swimming pool and poolside guesthouse in the hoity-toity Holmby Hills area that he scooped up in 1996 for an unrecorded amount from former Warner Bros. co-CEO Robert A. Daly. Perhaps looking for a change of real estate scenery or perhaps just as an investment, in the fall of 2006 the stylishly suave and deep-pocketed restaurateur and hotelier shelled out $18.5 million for a multi-parcel estate in a particularly posh section of Beverly Hills that had previously been owned by Marlo Thomas, David Geffen and radio mogul Norm Pattiz. Morton eventually split the estate in two and sold the larger chunk, with its 8,110-square-foot, city-view Tudor mansion, in May 2011 for $16.19 million to current owner Sandra Bullock.