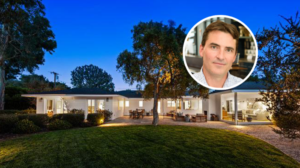 Less than a year after being ravaged by 2018’s Woolsey Fire, Malibu’s star-studded Point Dume neighborhood has seemingly made a full real estate market comeback. Witness this inconspicuous ranch-style home on one of the area’s best streets, tucked discreetly away behind gates and hedges. Despite any feigned or perceived modesty, the low-key property has traded hands for a whopping $13 million not once but twice in the last two years.

Back in summer 2017, married Argent Pictures producers Ryan and Jill Ahrens paid Equinox gym founder Danny Errico the aforementioned $13 million for the landlocked but well-located spread. While it’s unclear if the couple made any significant changes to the 1.23-acre estate during their two short years of ownership, the property was sold again last week for the same amount — this time, to Belgium-born hedge fund manager Thomas Laffont.

The two-structure compound includes a main house and a substantial guesthouse, both of which come equipped with their own two-car garage. The main house, a low-slung ranch-style abode with approximately 1,600 square feet of living space, was originally built in 1949 and has since been totally renovated with new wide-plank hardwood floors, soaring walls of glass, an outdoor fireplace and covered lanai with ample space for al fresco dining. Other interior amenities include a stacked-stone fireplace, a dining area, and a European-style country kitchen with custom cabinetry and high-end appliances. There are four bedrooms, including a luxurious “owner’s suite” with a custom closet and oversized bath.

In contrast to the main residence, the new-ish guesthouse is decidedly contemporary in architectural style, featuring soaring ceilings and rows of glassy sliders. The structure — which sports an unknown amount of square footage — is fully kitted out with a bedroom suite, living room, kitchen and den/media room.

Completely gated and high-hedged for ultimate privacy, the estate features broad expanses of well-watered grass and several mature olive trees. Perhaps surprisingly, the property does not currently include a pool — or an ocean view, for that matter — but the house is a short three-minute walk to Little Dume, the all-but-private beach that possesses one of L.A.’s most scenic coastlines. 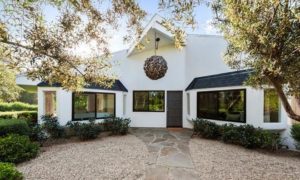