Howard Schultz to Step Down as Starbucks Executive Chairman 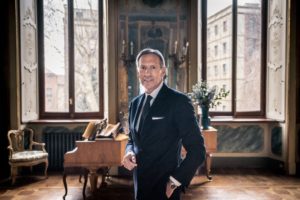 SEATTLE — Howard Schultz, the outspoken executive chairman of Starbucks, will leave the company at the end of the month, bringing to an end the tenure of a socially conscious entrepreneur who turned a local Seattle coffee chain into a global giant with more than 28,000 stores in 77 countries.

Mr. Schultz’s decision to retire, a plan he said he privately outlined to the board a year ago, will most likely stoke speculation that he is considering a run for president in 2020. He is frequently mentioned as a potential candidate for the Democratic Party and has become increasingly vocal on political issues, including criticizing President Trump last year as “a president that is creating episodic chaos every day.”

While Mr. Schultz, 64, typically bats away speculation about his political ambitions with an eye roll or a pithy answer, on Monday he acknowledged for the first time that it is something he may consider.

“I want to be truthful with you without creating more speculative headlines,” he told The New York Times. “For some time now, I have been deeply concerned about our country — the growing division at home and our standing in the world.”

“One of the things I want to do in my next chapter is to figure out if there is a role I can play in giving back,” he continued. “I’m not exactly sure what that means yet.”

Asked directly if he was considering running for president, he said: “I intend to think about a range of options, and that could include public service. But I’m a long way from making any decisions about the future.”

Mr. Schultz said he and the board had expected to announce his departure last month, but that plan was upended after an episode at a Philadelphia store in mid-April in which two black men were arrested after waiting inside one of the company’s stores without making a purchase. Last week, Starbucks closed all of its company-owned stores around the country for four hours for racial bias training, a program that Mr. Schultz had spearheaded.

The possibility that Mr. Schultz, who has spent three decades leading Starbucks, could run for president has become far more realistic with the election of Mr. Trump, a real estate developer and reality-television star before his political career.

Mr. Trump’s successful candidacy has set off a wave of speculation about business leaders eyeing a shot at the White House. Robert Iger, Disney’s chief executive, publicly said he had been considering running for president until he struck a deal to buy 21st Century Fox. Jamie Dimon, chief executive of JPMorgan Chase, is also thought of as a possible candidate, and Mark Cuban, the billionaire owner of the Dallas Mavericks N.B.A. team, has said he planned to consider running as Republican, but would need to convince his wife first.