Jack Lemmon’s Malibu Beach House on the Market for $13.45M 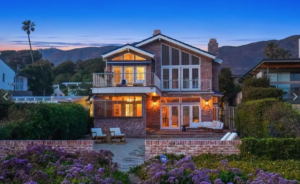 The former Malibu, CA, retreat of Hollywood legend Jack Lemmon has come on the market for the first time in decades, Mansion Global reported.

The two-time Oscar winner, who died in 2001, had owned the oceanfront getaway since he and his wife, the actress Felicia Farr, renovated it in the 1980s.

Located on idyllic Broad Beach, the “completely custom home,” according to the listing, offers 38 feet of frontage on one of the “deepest, sandiest sections of beach in Malibu,” the listing notes.

From the exterior, the brick house offers a traditional atmosphere, while the interiors exude a beachy, coastal vibe, with white painted exposed brick, white walls, and high ceilings.

As you enter, the space presents endless ocean views, as well as hand-carved wood, beamed ceilings, a light-filled atrium, and an open living and dining space. A modern kitchen includes dual sinks and plentiful storage. French doors lead out to the patio, with a covered seating area and a private beach. A short footpath leads to the ocean.

Upstairs, the master suite looks out to water views, and features an ocean-facing balcony, fireplace, private deck, and dual bathrooms. A guest bathroom on the upper level features designer printed fabric that covers the ceiling.

The lot is large, so that in addition to having the beach as the home’s backyard, its gated entry opens to a walled courtyard garden with a lawn, multiple fountains, and a pool.

Over the years, the Lemmons’ beach house reportedly hosted such entertainers as Walter Matthau, Gene Wilder, and Frank Sinatra.

The legendary actor starred in over 60 films, including comedies such as “Some Like It Hot” and “The Odd Couple,” and dramas such as “Missing” and “Glengarry Glen Ross.” Lemmon died in 2001 at the age of 76. 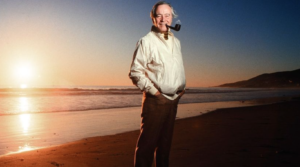