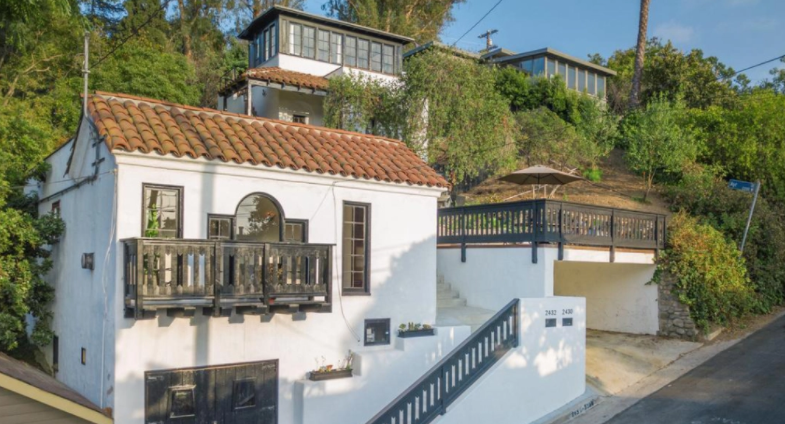 YOUR MAMA’S NOTES: Art minded Hollywood hyphenate James Franco decided to part real estate company with his quirky duplex in the hipster-thronged, boho-chic Silver Lake area of Los Angeles and listed it with an asking price of $949,000. The busy-as-a-beaver actor, writer, director and producer, nominated for an Oscar in 2011 for the bio-drama “127 Hours” and currently starring on the HBO series “The Deuce”, purchased the 1920s Spanish-style duplex in August 2012 for $775,000 from Emmy-winning “Mad Men” costume designer Janie Bryant. Less than a year after he acquired the property, one of the neighbors complained via email to Curbed that the property functioned less as a residence and rather as the home of “MAJOR production company” that appeared to be operating out of the property. Briefly owned at the turn of the century by musician, filmmaker, fashion-world scion and European princess Tatiana von Fürstenberg, who last year shelled out $12 million to acquire a far more grandiose cliff-top villa in Palos Verdes, the hillside property includes two legal units that together measure 1,496-square-feet with a total of three bedrooms and three bathrooms.

The smaller, lower unit, atop a street-level single-car garage with one bedroom and one bathroom, has good sized living room with hardwood floors, an arched ceiling and a wood-trimmed Palladian window that extends almost floor to ceiling, plus a small eat-in kitchen with vintage cabinets. It’s a considerable, glute-busting multi-story hike up from the street to the larger unit, an apartment-sized three-story villa with two bedrooms and two bathrooms. Vintage saltillo tile floors run throughout the main-level living spaces that includes a slender living room with exposed wood ceiling beam, a separate dining room with French doors and a decidedly compact kitchen open to the living room over a raised snack bar with pedestrian white cabinetry, average-grade appliances and butcher block counter tops. The flooring switches to hardwood planks on the second floor where there’s a small study/bedroom and a larger second bedroom with an en suite bathroom, a white brick fireplace and a Palladian window shaded by a circus-style red and white striped awning. A small loggia off the larger bedroom leads to an exterior staircase that climbs up to an airy, light flooded “crow’s nest” office/art studio lined on three walls with six-pane casement windows that frame open, westerly views over the Silver Lake reservoir towards the Griffith Observatory. The property has a number of outdoor entertaining and leisure spaces including several private, tree-shaded terraces carved into the hillside behind the duplex and a large deck atop a two-car street-level carport. 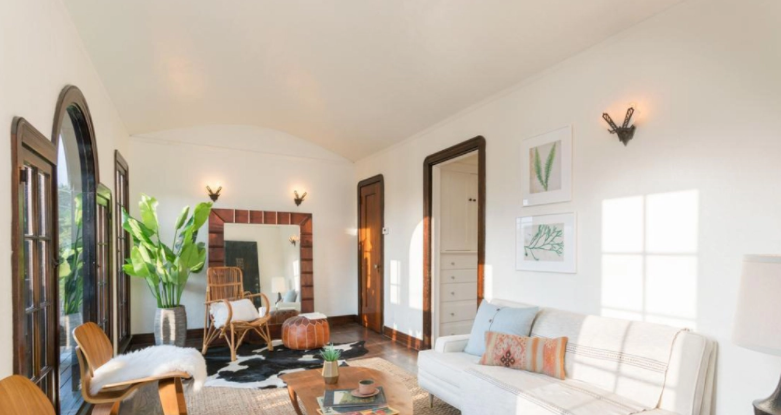