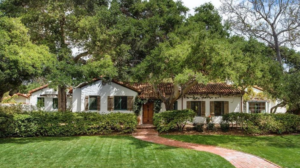 Actor Jeff Bridges has listed his four-acre compound in Montecito, California, for $7.995 million.

He purchased the Southern California home under a trust in 2014 for $6.85 million, according to public listing records.

The Santa Barbara County house—which hit the market April 26—was built in 1919 and “extensively renovated” by Mr. Bridges in 2016, according to a news release.

The main house is a one-story Spanish Revival with three bedrooms and two-and-a-half bathrooms. It features high vaulted wood beam ceilings, five fireplaces and the original windows and doors, according to the listing.

“He’s a real Renaissance man and that was his space to do his favorite things,” she told Mansion Global.

Although Mr. Bridges did not own horses, the compound also has an equestrian facility with five stalls, a corral and a tack room.

Set back from the road, the property is very private and peaceful, Ms. Hanseth said, yet it’s only a couple of miles from the beach. The expansive grounds have paths that lead through a butterfly garden, orchards, and oak and redwood groves.

“It has so much soul,” Ms. Hanseth said. “It’s exactly where you’d imagine [Mr. Bridges] would live.”

Mr. Bridges, 69, who is known for his roles in “The Big Lebowski” and “Crazy Heart,” is selling the Montecito home in order to spend more at his second home in Montana, Ms. Hanseth said.