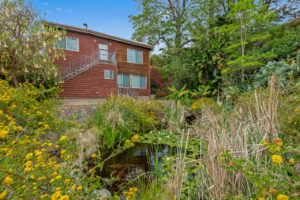 Kiehl’s heiress Jami Morse Heidegger and her husband Klaus Heidegger are slashing the price of their Malibu, Calif. ranch to $25 million, nearly 55% off its original price tag.

The Heideggers first listed the property for sale for $55 million in the summer of 2017, but failed to obtain any compelling offers, Mr. Heidegger said. They originally thought they would complete construction of an expanded 11,000-square-foot main home for a prospective buyer before a sale, but permitting took longer than expected. So they decided to leave the property as is, and reduce the asking price.

The 25-acre property, which overlooks the ocean, comprises a 1970s-era main house with four bedrooms, a horse stable and three guest houses.

The couple purchased the property in 2002 for $2.6 million, according to property records. They wanted an equestrian property for their two daughters who were interested in show jumping, said Mr. Heidegger, 61. The equestrian facilities include stables with nine stalls and a lounge area for riders.

Mr. Heidegger said the couple is selling because they are getting older, their children have gone off to college and they’d like to travel more. Ms. Heidegger is descended from Irving Morse, who bought Kiehl’s as a small pharmacy in 1921; her father grew it into a well-known cosmetics brand. She sold the company to L’Oréal in 2000.