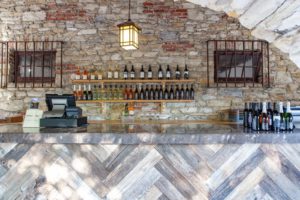 Unlike Napa or the Central Coast, the San Fernando Valley is not known among Angelenos as much of a wine destination. But the new Malibu Wines & Beer Garden in West Hills is out to change that, transforming a historic property into a destination for local wines and even pizza.

Malibu Wines & Beer Garden is the work of the Semler family, owners of Saddlerock Ranch and longtime winemakers in the greater Malibu area. They bottle wines from their own estate vineyards in the Santa Monica Mountains, and are now pushing their own supply at a gorgeous new property just north of Calabasas. Technically the new project is an offshoot of the Semler’s laid-back tasting room in Malibu proper, but this one is a whole lot more grandiose. The Spanish-influenced property was actually an estate owned by 1930s-era actor Francis Lederer, and was declared a historic cultural monument in 1978.

After spending years as an event space, the estate has now been outfitted to allow for public drinking and light dining on the large, lush lawn, plus weekend live music. There’s an indoor-outdoor bar for wine and craft beer pours, and pizza will be provided on weekends only, with pies from the Two Doughs food truck on Friday nights and all day Saturday and Sunday. This is still a Semler-owned establishment, though, so expect the wine to be limited to include Saddlerock Ranch and Semler-branded bottles.

Malibu Wines & Beer Garden is now open in West Hills, keeping hours from 11 a.m. to 7 p.m. most nights, with an extension to 9 p.m. on Friday and Saturday.