Malibu Beaches Among Cleanest in California 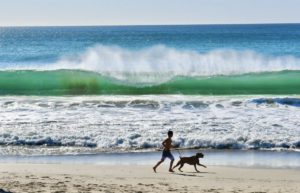 By Samantha Bravo / Special to The Malibu Times

Every year, Heal the Bay, the environmental nonprofit, releases scientific reports on bacterial pollution for beaches and rivers in California; this year, 35 beaches out of 500 studied received “A” and “B” letter grades for summer 2020. But among Southern California beaches, one stretch of sand in particular stood out: Malibu.

During the Heal the Bay conference in Manhattan Beach on Tuesday, June 29, Shelly Luce, president and CEO of Heal the Bay, said Los Angeles County had seven beaches on the honor roll list, nearly all of them in Malibu.

“Malibu did great this year; they got “A” grades year round, even during wet weather,” Lucesaid. “So, that means that we’ve seen the end of the Woosley Fire impacts on water quality, so this is good.”

Luce said beaches such as Surfrider Beach are improving in water quality during dry weather and said the Malibu Lagoon restoration improved the hydrology of the wetland area to a natural wetland system.

Improvements can also be seen in the river report card. Since 2014, Heal the Bay has monitored two fresh water recreation sites in the Malibu Creek watershed: Malibu Creek at Rock Pool and Las Virgenes Creek. The sites are easy to access, making them popular for swimming.

According to the 2021 Beach Report Card press release, beaches and rivers usually have high-risk water quality following a rainfall.

In addition to the extreme heat and wildfire season, the COVID-19 pandemic created a dire need for equity, Heal the Bay spokespeople said, and the report card gives visitors access to the latest water quality and safety information.

Shelley Luce, Heal the Bay president and CEO, speaks during a press conference announcing the results of the Heal the Bay 2021 Report Card.Samantha Bravo / TMT “There’s no indication that you can catch it [coronavirus] from the water,” Luce said. “At first, I understand [that] when we didn’t know anything about this virus people were concerned, but now we know it doesn’t transmit on surfaces and it doesn’t seem to transmit in water.”

Due to the uncertainty of the pandemic, Heal the Bay was unable to monitor all rivers this year, but Luke Ginger, Heal The Bay water quality scientist, said they were able to sample areas in Malibu Creek sites.

“We usually do it [collect samples] in late May or June, but there were just a lot of unknowns at that time in regards to the pandemic,” Ginger said. “We just weren’t sure what resources we had. We typically hire local college students to do the sampling and last year we just had to do it with Heal the Bay staff, so we were just restricted with the number of people and the amount of time everybody could devote to it.”

Ginger said their monitoring program was lifting off when the pandemic hit. He said samples were being collected on a weekly basis.

“We were still able to go out and collect samples, we just had to scale back a little bit,” Ginger said. “We usually monitor four locations in the LA river—we scaled back to three.”

“You can run into poor water quality there if the lagoon water gets into the ocean, but that’s unlikely to happen in a year like this where we haven’t got a lot of rain,” Ginger said.

“In that last report, we noticed elevated levels of bacteria that kind of persisted for a little while after the Woolsey Fire, and that bacteria was getting washed into the ocean more so than usual,” Ginger said. “It has either died off from UV radiation or it was carried away by ocean currents or wave action a long time ago. Ultimately, those bacteria have died.”

In regard to COVID-19, Ginger said it was something they were worried about last summer because there wasn’t enough data, but they have an idea how the virus works now.

“As of right now, CDC has not found any evidence that you can contract COVID by swimming in the water, which is a great relief,” Ginger said. “COVID hadn’t been around long enough for us to know, but now we have a really good idea and we have data on it. There is other stuff in the water besides COVID that we need to worry about. We’re already protecting ourselves against those things in a normal non-pandemic year—we’re already being cautious, but COVID was an extra concern.”

Each year, the nonprofit also releases a list of “beach bummers”—beaches with particularly low water quality. Last year, Topanga made the list; this year, no area beaches are considered “bummers.”

Before visiting a beach, Heal the Bay provides updated scientific information on the water quality and grades.

“Ocean beaches are pretty clean, so we just encourage folks to go out, enjoy the ocean and if your favorite beach gets poor grades, there’s going to be other beaches close by that are probably good,” Ginger said. “Los Angeles County is filled with some amazing freshwater areas to explore and swim, so we encourage people to go out and enjoy what’s in front of us.”