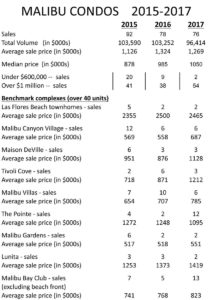 Most of the attention in local real estate goes to the big sales, and in 2017 there were plenty, led by an $85-million beach estate. The home market throughout Malibu was robust, increasing 14 percent to a new all-time median price of $3,650,000.

That was among 76 sales of units all around Malibu, a tally in line with recent years.

After a few more secret sales are unveiled in public records, the total volume of condo business will likely top $100 million for the year. For single-family homes in Malibu, it was nearly $1.5 billion, or 15 times greater. The average sale price actually showed no increase, but that was mostly due to the concentration of sales at more affordable prices (let’s say under $1 million, where the current inventory is practically wiped out).

The above chart has two features. First, the market synopsis of Malibu as a whole, from 2015-17, where the number of sales under $600,000 has gone from 20 just two years ago to two last year (while sales over $1 million have increased). Secondly, the largest complexes in town, and representing the majority of the sales, are specifically shown. The changes in average price show general trends—your particular unit may have a unique value.

One of Malibu’s newest projects is The Pointe—it is now more than 20 years old. They just ain’t making new condos anymore in Malibu, which is the key sentence in the article, because a supply that is virtually capped almost guarantees price increases. The Pointe had a resounding 12 sales last year.

Malibu Canyon Village had a notable increase in values, while the Malibu Gardens is poised to—currently with all listings and escrows over $600K. In neither of Malibu’s lowest-priced complexes is a sale under $600,000 likely under current conditions—in the standard market of two-bedroom units with roughly 1,000 square feet. That is Malibu’s floor at the beginning of 2018.

A boom in sales at the Malibu Bay Club (excluding Beach Club Way, the large beachfront townhouses) nicely shows the higher level of costs, just as the Malibu Villas demonstrate their continuing revival.

Curiously, the condo market has not hit its all-time high. That was in 2008 at $1,165,000, albeit with a scant 44 sales. Thus, a new record high is the target, as it is with the state and county, which are both still lurking just below the all-time highs of a decade ago.

Malibu had nine condo/townhouse transactions of $2.5 million-plus in 2016, which tapered off to only six last year (as well as six in 2015). So the average sale price, which rose 30 percent for single family homes last year, shows a slight loss, statistically, for condos. Nevertheless, the chances to even find a unit under $1 million have thinned out, as complexes such as Maison DeVille, Vista Pacifica (adjacent Webster School), Portico and all units along Dume, Heathercliff and Tapia are bidding farewell to six figures.