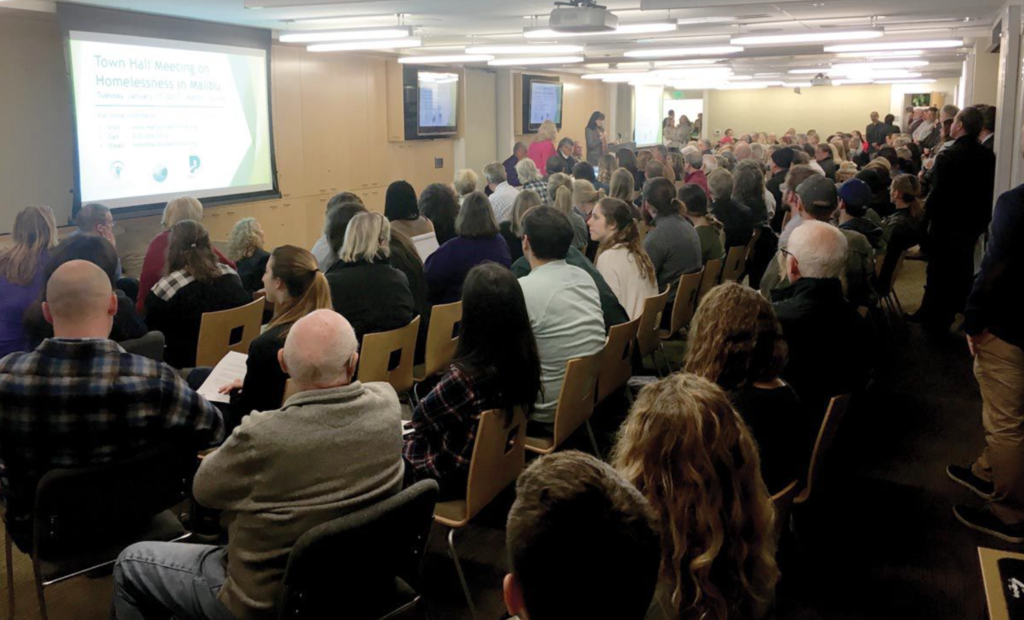 By Jimy Tallal / Special to The Malibu Times

A first-of-its-kind town hall meeting on homelessness was held at Malibu City Hall last week, co-sponsored by the City of Malibu, the Malibu Task Force on Homelessness (MTFH) and The People Concern (formerly OPCC and Lamp Community). A standing-room-only crowd of nearly 200 people included four city council members, clergy from a half-dozen local congregations, representatives of other local groups that assist the homeless (CART and SOS), and at least a dozen current and former homeless.

“Tonight is a night about hope,” Council Member Laura Rosenthal said. “We hope to shed light … on an often misunderstood subject, and you should know what’s being done to help.” She reviewed the 2016 homeless count in Malibu, which totaled 161 individuals who were three-quarters male and included three families.

Jay Scott, co-chair of MTFH, said he was pleasantly surprised at the large turnout of Tuesday’s meeting, which resulted in 49 people signing up to volunteer.

“I think it was very informative for the audience, The People Concern did a wonderful job of explaining their services and the Q&A was very lively with a lot of people getting their questions answered,” Scott said.

Malibu has experienced a noticeable increase in homelessness over the past several years, like most other communities in LA County. Concerns about public safety as well as compassion for the plight of these people resulted in citizens coming together and forming groups to help. One of these groups, the MTFH, decided its sole mission was to raise money to bring in a professional social organization with two full-time outreach workers.

The first part of the Town Hall meeting was used to educate and inform about what’s now happening with homelessness in Malibu.

Pamela Conley-Ulich, former mayor and current co-chair of the MTFH, reviewed fundraising efforts for bringing in the two outreach workers and a van for the next several years, with $300,000 raised so far from nearly 90 individual donors and businesses. The biggest donor was there in person — Steve Hilton of the Conrad Hilton Foundation, which gave $100,000.

“The [homeless] people we serve are people with mental illnesses, physical health problems and substance abuse issues,” Miller said. “There’s a lot of trauma — 85 percent of homeless women are victims of severe trauma … The people you’re seeing out there have been through a lot.”

She explained that the outreach workers first establish relationships with homeless individuals and build their trust, which begins the process of connecting them to housing and services.

“Given the short amount of time, that’s really hitting it out of the park,” Miller said. “Malibu has more homeless people living in cars than some communities, making them harder to find.”

The outreach workers use a form of triage to determine which homeless people to focus on first out of the many they encounter.

“We target first the biggest threats to the community and the ones most likely to die if they don’t get help. We made a list of 16 of those in the first few months,” Miller explained.

Executive director Maceri said permanent housing units for Malibu’s homeless would likely be scattered all over LA County, but not in Malibu or most of the Westside because of high rents. He cautioned it often takes more time than most people realize to get someone permanently off the street. “This work is a marathon, not a sprint … we’re not magicians.”

Deputy Treinen, with the LA County Sheriff’s Department, has been dealing with the Malibu homeless population for years.

“Law enforcement’s primary concern is to keep everyone safe and enforce laws,” he said, but emphasized that “being homeless is not a crime.” He said the majority of homeless in Malibu do not create problems, and most of the arrests and interventions that do occur are for drunkenness, trespassing, threats and untreated mental illness.

Burt Ross, MTFH member, wrapped up the meeting and said later in an interview that he hoped the meeting dispelled some of the negative stereotypes about the homeless, and reinforced the idea that professional social services are needed here.