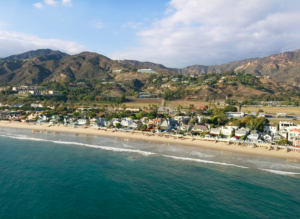 A wave of frenzied home buying has washed over Malibu, where sales on the beach quadrupled in the first three months of the year, according to a report from Douglas Elliman on Thursday.

The ultra exclusive Malibu Beach neighborhood, lined with the multi-million-dollar homes of celebrities and business tycoons, logged 24 sales in the first three months of the year, compared to only six the first quarter of last year, according to the data. Across all of Malibu, sales were up 36% over last year, underscoring the strength of the Los Angeles market in comparison to the softness in other U.S. luxury hubs.

“Malibu has become a trophy location,” said Jonathan Miller, president of Miller Samuel, which authors the reports for Douglas Elliman.

The median price in Malibu was $2.45 million in the first quarter, and about double that, at $4.75 million, in Malibu Beach.

It’s worth noting Malibu’s market is so small that minor changes to sales and prices will exaggerate any growth or decline there. But what’s certain is that the stretch of beach north of Los Angeles has become one of priciest locales in the U.S.

Malibu has attracted some of the biggest sales in the country over the past year. They include billionaire entertainment impresario David Geffen selling his Carbon Beach estate for $85 million and billionaire hotelier Peter Morton unloading his contemporary beach home, which closed on Tuesday for a city record of $110 million.

Meanwhile, across the mainstream market in Los Angeles, prices rose for the 23rd consecutive quarter to $1.524 million, a 5% rise over a year ago and sales were up 33%, according to the data.

In the luxury segment, Los Angeles continues to defy wealth hubs like New York, Miami, London and Dubai, which have all experienced varying degrees of cooling at the very top of the market. Douglas Elliman defines luxury as the top 10% of sales.

Los Angeles, where the main luxury product are single-family mansions, has not suffered from the overdevelopment of speculative luxury condo projects in the same way as Miami or Dubai.

La La Land’s luxury market, however, still suffers from the same unrealistic overpricing as other high-end locales. The average discount off the price of luxury single family homes in the first quarter hit 10%. In Malibu Beach, despite some record deals, the average home still took a whopping 17.5% price cut.