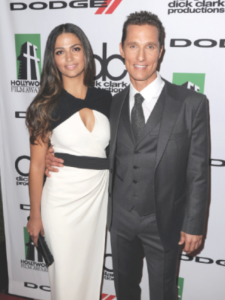 Local resident Matthew McConaughey is getting rave reviews about his new film. He recently appeared with wife Camila at the 17th Annual Hollywood Film Awards.

When mega movie honcho Harvey Weinstein says this will be one of the best Academy seasons in years, sit down and take note.

Malibu’s Matthew McConaughey is getting a lot of Oscar buzz about his role in “Dallas Buyers Club.” There’s also chatter around loads of other locals like Tom Hanks and Leonardo DiCaprio.

McConaughey hits the screen as Ron Woodroof—a rough and tumble homophobic Texas good old boy who discovers he is HIV positive. Critics have called it one of the best performances of McConaughey’s career.

The movie is set in the mid 1980s when HIV fear was at its peak. It shows how a frustrated McConaughey sets up a ring to sell non-FDA approved drugs to other HIV patients. The storyline may not be especially upbeat but McConaughey poured his heart into it. The famously buffed actor even went so far as to shed 50 pounds, dropping down to a mere 135.

The film has been hailed as “sensational.” He co-stars with Jared Leto and Jennifer Garner. Both turned out fine performances as well.

Up next, McConaughey will really be on the market. He’ll team up with Leonardo DiCaprio in “The Wolf of Wall Street.” The tale of a wealthy stock broker living the high life isn’t out until next month but hey, with Martin Scorsese at the helm, this flick is bound to be a hit.

Several other out of this world, or lost at sea movies, are making waves. Local Tom Hanks has received applause for his role as “Captain Phillips.” It’s based on the true-life story of a U.S. cargo ship hijacked by Somali pirates.

Robert Redford also takes on a man-versus-sea adventure in “All is Lost.” Superstars Sandra Bullock and gorgeous George Clooney have been receiving high marks for their nail-biting space adventure “Gravity.”

Sandra’s already gained some big mo on the way to the Oscars. She will honored at the 25th Annual Palm Springs International Film Festival in January. The Academy Award-winner will be presented with the Desert Palm Achievement Award. “Sandra Bullock is the epitome of cinematic talent and versatility,” said Festival Chairman Harold Matzner. “In her latest and arguably most demanding role as first-time astronaut Dr. Ryan Stone in ‘Gravity,’ Bullock faces the primal nightmare of being stranded in space with no apparent way of returning. Throughout the entire film, her determination to survive is masterfully portrayed.”

Our neighbor Matthew McConaughey won’t be left out of the festivities either. He’ll also receive a PSFF achievement award. It’s hard to believe the festival has been around for a quarter century.

Over the years it has honored many well-known locals, including Halle Berry and Charlize Theron. The event helps kick off the big red carpet season. So let the awards race begin!