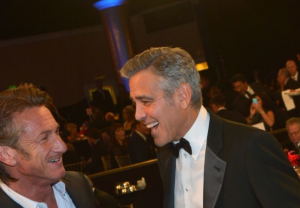 If you didn’t look at your calendar, you might think you were at the Oscars when some of Hollywood’s biggest names turned out at the Beverly Hilton for the British Academy of Film and Television Arts (BAFTA) Awards.

They all got gussied up to celebrate BAFTA Los Angeles, which honored entertainment excellence at its Jaguar Britannia Awards. Locals Sean Penn and Julia Roberts mingled in the crowd along with Ralph Fiennes, Salma Hayek and Sigourney Weaver, just to name a few.

The big Academy night is still many weeks away, but that didn’t stop 88-year-old Angela Lansbury from picking up a golden statuette. The famous actress, known for her longtime TV role in “Murder, She Wrote” as well as acclaimed performances in memorable films like “The Manchurian Candidate,” was given an honorary Oscar at the fifth Governors Awards presentation.

Angela attended her first Academy Award ceremony in 1945 when she was nominated for her role as a Cockney maid in “Gaslight.” Many famous film roles followed and now, nearly seven decades later, she takes home the coveted statuette.