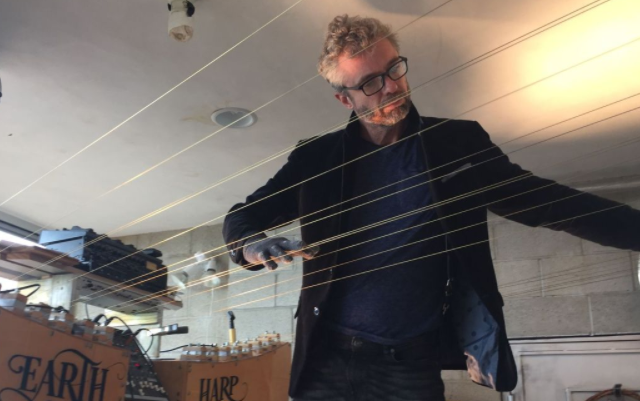 From ‘America’s Got Talent’ to Downtown LA, William Close is bringing his musical talent to the masses.

Winding up Corral Canyon, high in the Malibu hills, you’ll find the eclectic and innovative studio/workshop and home of artist-musician William Close. In what Close describes as a “magical setting,” he creates one-of-a-kind musical instruments — including the world’s longest stringed instrument, verified by the Guinness Book of World Records. He calls it the “Earth Harp” and in June he kicked off the summer concert series at Grand Performances in downtown Los Angeles playing the Earth Harp reaching 52 stories high.

Taking two days to set up, Close and his team strung 1,000 feet of musical wire only the thickness of vermicelli from the 52-stories-tall 2 Cal Plaza in downtown for the concert. Fifty-two spools were lowered, one at a time, and attached to the Earth Harp’s resonating chamber that’s 15 feet long. Along with building the harp, Close designed a tuning mechanism to make pitch adjustments to the skyscraper installation.

Each giant string on the harp corresponds to a note. It uses three-plus octaves chromatically tuned from low G on up. Capos or metal tuning blocks placed on the strings at various lengths as far as 160 feet out are used to stop vibrations and create pitches. Close pinches the strings with gloved hands and glides them along to make ethereal sounds.

He’s built more than 1,000 installations of the Earth Harp, stringing them at the Colosseum in Rome, the Grand Theater in Shanghai and the Kennedy Center in Washington, DC, where he just completed a residency.

“One of my first public performances on the West Coast was stringing the mountain peak at Eric Lloyd Wright’s property 12 years ago. There’s a certain mystery to Malibu,” the innovative performer said.

Years ago, while touring the country, Close drove into Malibu and told himself, “This is it.” He immediately rented a house, remarking, “Since then, I’ve had quite an adventure in Malibu.”

One of those adventures was a terrible loss that many Malibuites are far too familiar with. In 2007, he woke up to find his Corral Canyon mountainside on fire. He rushed to grab the few handmade instruments he could carry while his whole house and studio burned to the ground. Everything was lost. It took four years to rebuild.

“It was a rough time, making it through and rebuilding, but there’s a silver lining,” Close said. He was able to redesign the new house to be constructed with the strings of the Earth Harp as part of the architecture. Wires shoot out from an opening in the roof and are anchored to an adjacent hillside.

“What’s wonderful about Malibu is that the weather’s great, but also there are no mosquitoes,” Close said, “so you can have an open living and working experience — and I very much work inside and outside because that’s the beauty of the place.” Close uses his home Earth Harp to record.

Close has invented and built more than 100 unique musical instruments, including percussion and multiple neck guitars. For a recent Super Bowl, he erected huge drum spheres to be played. He’s even built wearables — the violin jacket and a percussion suit.

“It’s my medium and how I express it is through creating musical devices,” Close shared. “The earth harp started with mounting chambers on one side of a valley and I strung 1,000 feet of wire across a canyon to the other side. It turned the canyon into a giant harp. That’s where it gets the title ‘Earth Harp.’”

Close received national acclaim in 2012 on the television program “America’s Got Talent.”

“I walk out for the first audition and Howard Stern, immediately starts to roast me -and then I started playing and every body’s jaw dropped, and by the end, Howard Stern was saying that he bows to me and what I do and I was the first guy he ever voted ‘yes’ for,” Close reminisced. Eventually, he came in third.

“It was creatively satisfying,” he said.

Along with recording, Close performs with his group, the Earth Harp Collective, with six to seven other performers — some playing the percussion or multiple neck guitars he’s created.

Citing his musical inspirations as Beethoven, Aaron Copeland and Phillip Glass, Close composes his own pieces and is currently recording a symphony. To hear Close and his instruments, go to EarthHarp.com or search for William Close on Youtube.