Just weeks before his 50th birthday, former “Friends” star Matthew Perry has decided to considerably lighten his real estate load, listing a suburban mansion-sized penthouse atop the ritzy Century Tower in Los Angeles’s Century City at $35 million. As noted by the property gossips at Mansion Global, the eye-popping price tag makes it the most expensive condominium currently on the market in Los Angeles. Co-star of the 2015-17 reboot of “The Odd Couple” and last seen on the small screen as Ted Kennedy in the 2017 miniseries “The Kennedys After Camelot,” the sitcom veteran purchased the elephantine, full-floor aerie just over two years ago for $20 million, notably below the $26.5 million asking price. The sumptuously appointed spread was subsequently transformed for Perry by architect Scott Joyce and interior designer LM Pagano and, per listing descriptions, incorporates “a stunning palette of textures and colors that are both contemporary and classic.” 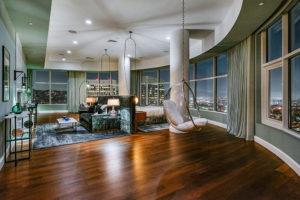