Matthew Perry of “Friends” found a buyer who was there for him. He has successfully sold his Malibu, CA, beach house for $13.1 million.

Perry had initially listed his “kick-ass Malibu home”—as he called his place on social media—in August for $14.95 million. In September, the actor dropped the asking price by a million dollars, to $13.95 million.

He then slashed the price one last time to $12.95 million. That reduction attracted a buyer, who scooped up the swanky space for just a little over the ask.

Although the price ended up lower than his initial asking price, Perry came out ahead. The savvy star picked up the the property in 2011 for $12 million.

Perry reportedly bought the beachfront abode from the Southern California developer Scott Gillen, who completely transformed the circa-1960 build.

The result is a loftlike space with expansive walls of glass, looking out to the Pacific Ocean.

The fab pad can hold lots of friends, with two floors, four bedrooms, and 3.5 bathrooms on 5,000 square feet. The main level features an open living and dining area, a fireplace, beamed ceilings, and sparkling views of the ocean. The glass walls completely open up, extending the living area out to a deck that runs the length of the house on both floors.

A floating wood-and-steel staircase leads to the lower-level master suite, which includes a sitting area, walk-in closet, and luxurious bathroom. 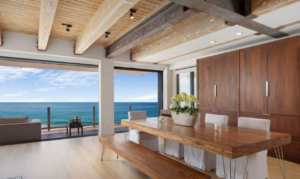 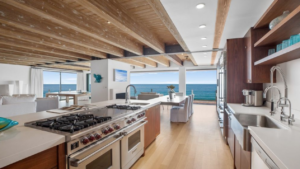 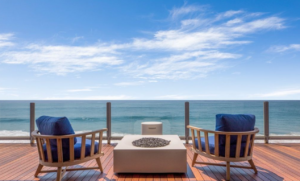 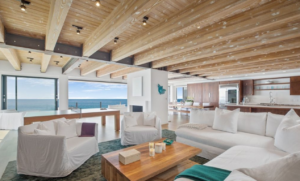 The home also features an outdoor spa and a state-of-the-art home theater.

Meanwhile, the deck comes with plenty of seating and a fire pit, perfect for catching the sunset.

“The minute you walk through the front door, you have a completely open and expansive view of the ocean, with floor-to-ceiling and wall-to-wall windows,” Robledo says. “Two decks on both levels spanning the length of the home—maximizing the outdoor space—also made it extremely compelling. This is the perfect getaway place.”

Perry took full advantage of the beach pad as his personal getaway during the pandemic. He posted photos to his Instagram account from the property as he hung out on his deck or baked cookies in the kitchen.

Perry had been on a selling spree, also placing a posh penthouse on the market in Los Angeles in 2019 for $35 million. In 2017, he bought the “mansion in the sky,” which occupies the entire 40th floor of the Wilshire Corridor’s elite Century Building, for $20 million.

He renovated the place to his taste, with what looks like wall-to-wall velvet furniture, a huge master suite with views, and the home theater. The listing is currently off market.

Now that he’s freed from his real estate concerns, the star’s new focus appears to be an adorable puppy. 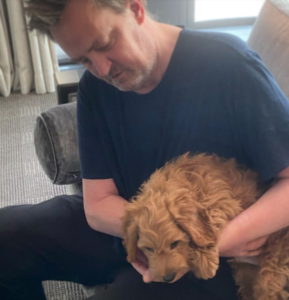