Blockbuster film producer Joel Silver is looking for his second major home release in two years. After selling his Malibu estate last year for $38 million, Silver has listed his Brentwood home for sale at $77.5 million.

The bright-colored and striking Mexican modernist residence was designed by architect Ricardo Legorreta. Completed in the early 2000s, the roughly 26,000-square-foot house includes a circular atrium, a dining room topped with a pyramid-like ceiling and a 30-foot-high family room with hydraulic doors.

Several of the outdoor areas were designed to be used as individual living spaces. Stone walls and mature trees provide cover for a sunken basketball court. Covered and uncovered patios surround the swimming pool, which has a lap area.

An English maze garden with an ornamental fountain at its center lies elsewhere on the roughly five-acre property.

In Brentwood and neighboring pockets such as Pacific Palisades, past sales have yet to eclipse the $40-million mark. If the Silver estate sells for its asking price, it would be nearly double the Brentwood price record of $40 million set in 2014 when NFL star Tom Brady sold his home to hip-hop mogul Dr. Dre.

Silver, 67, has been producing box office hits since the 1970s, including the “Predator,” “Matrix,” “Die Hard” and “Lethal Weapon” franchises. He is set to produce the upcoming “Sherlock Holmes 3” film as well as the reboot of the 1976 science fiction film “Logan’s Run.” 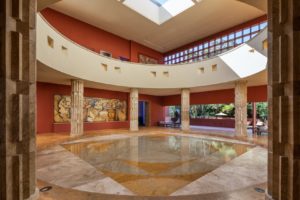