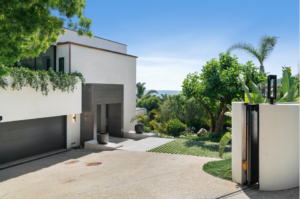 On the highway to heaven, a bonanza awaits. Sounds like a religious mantra or a Hollywood pitch. But it’s actually a real life sentimental love story relating to Cindy Landon, widow of actor-producer Michael Landon, star of Bonanza, Little House on the Prairie and Highway to Heaven.

The heavenly 21-mile drive through Malibu serpentines against a backdrop of sparkling Pacific Ocean, pristine beaches and the picturesque Santa Monica Mountains. Somewhere along this scenic highway, a newly renovated Malibu beach house awaits a suitor for $18 million.

“I have been thinking about making a change and moving back to the beach for some time,” says Cindy. “When I saw this property I fell in love with it.”

Cindy mined this gem 2 ½ years ago (for $7.5 million) with the intention of making it her new home. Although it needed updating, she thought it was time—finally time to move on from the 11-acre estate she shared with Michael and return to the beach, where soft sand and crashing waves tend to soothe the soul. But, not so fast.

After investing $4 million to renovate her ideal oceanfront house (a 6,900-square-foot hideaway with direct beach access), she had a change of heart. She didn’t want to pack up all those family memories.

“I had every intention of moving into the home but when it came time to move I realized I wasn’t ready to sell and move from the home Michael and I built together—and where [our] children were raised,” says Cindy.
That sentimental home she speaks of is also in Malibu, but altogether different. It’s an 11-acre property she shared with Michael, their kids Jennifer and Sean, and their animals, including horses. America witnessed Michael’s horse riding skills as “Little Joe Cartwright” on the landmark TV series Bonanza, which aired on NBC from 1959 to 1973. So to Cindy, this might as well be The Ponderosa—a huge plot of land, a utopia built around family.
Family was strong theme in all of Michael Landon’s TV shows. In real life, he was married three times with nine beloved children. Cindy met Michael Landon as a makeup artist on the set of his show Little House on the Prairie. The Landon homestead is reportedly a lush Spanish hacienda style once featured in Architectural Digest. Michael lived and died in that home. The estate isn’t little or on the prairie, but the family bond is still strong 27 years after his passing.

So Cindy decided to introduce her beach house to market—with help from her son Sean, a Coldwell Banker listing agent. “I will always have a special love for the home where I grew up, so for me, selling this property is much easier emotionally,” says Sean. “I am very excited to be selling it. The design and views are truly second to none and whoever ends up purchasing it is going to be extremely happy.”

The beach house is a labor of love. Cindy supervised a complete redesign and renovation of the prime oceanfront property—investing more than $4 million in upgrades. To design the home, she hired acclaimed architect Doug Burdge, who has created more than 200 luxury estates in Malibu, as well as boutique hotels, restaurants, shopping centers and private clubs. The one-of-a-kind property was built by Scott Halley & Associates, which specializes in constructing high-end custom homes in the Malibu area.

“The home was outdated and needed to be renovated to make the most of the outstanding ocean views,” says Cindy. “But I saw the potential. For example, by adding sliders to the home it now allows you to have an outdoor-indoor living experience. We modernized the entire home. It’s a different house.”
The five bedroom, six bathroom beach house is a reimagined bluff property with a rare attached additional parcel (bringing the lot size to 14,367 square feet)—enough room to add a pool. Infused with an open-air ambiance and light relaxing color palette, the home boasts ocean vistas throughout, hardwood floors, and a contemporary chef’s kitchen with a unique wood slab island bar, dining room slab table, and deck access to a garden.
“The views are truly magical,” says Sean. “Where the home is situated on the low level bluff gives you such an amazing panoramic view of the coastline. That coupled with the large sandy beach just in front, the exotic vegetation and ocean rock formations, truly make this my favorite view in Malibu. The property was taken down to the studs and entirely remodeled to be a modern masterpiece so every square inch was carefully constructed.”
The master suite offers coastline views from bed and bath, a massive walk-in closet and a large infrared sauna. Above the stairwell, a modern sun cupola provides ample natural light. The bottom floor features a game/media room with a wet bar, connoisseur wine cellar, humidor and two guest bedrooms.
“I was looking for an open, clean, modern style home and with the second parcel have created a lush garden with the vibe of being somewhere like Bali,” says Cindy. “Plus the outdoor dining with ocean views and gardens remind me of when I lived in the south of France.”
Outside yoga is encouraged here—highlighted by a Zen garden, a gazebo, koi pond and an outside shower after beach runs. There’s also a covered porch and open patio.
It’s easy to see why Cindy Landon would want to live at the beach, or at the hacienda—in Malibu. Malibu is the kind of casual, affluent beach community that inspired Miley Cyrus’ infectiously mellow song, “Malibu.” Hollywood celebrities and diehard surfers tend to gravitate here. The Landons did too.

Cindy put a lot of TLC into her Malibu beach house. But even that doesn’t compare to her affinity for the family hacienda—where she still belongs, for now.