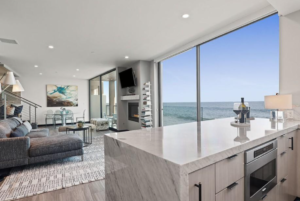 Milwaukee Brewers outfielder Christian Yelich is ready to play ball with Malibu real estate. His modern beach house is now available for $6,295,000. The 28-year-old All-Star purchased the property in 2018 for $5.6 million.

While nowhere near Wisconsin, Malibu isn’t far from where the MVP grew up, in Sherman Oaks, CA.

The marvelous Malibu home was brand-spanking new when Yelich bought it a couple of years ago.

The pristine setting is just steps from the beach, with three bedrooms and three bathrooms. Enter into the living room, which faces out to the ocean. Floor-to-ceiling walls of glass frame the lovely vistas.

The living space also features a fireplace and adjoins the eating and cooking area. The adjacent gourmet kitchen comes with a waterfall-edge island, bar seating, and sleek cabinetry. A separate family room and media center is the perfect entertainment area, dominated by the wet bar. 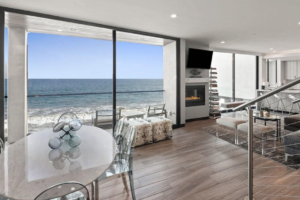 A serene master suite can access the outdoors, and includes a fireplace and a bath with a free-standing tub. 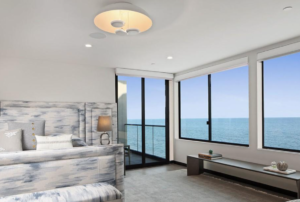 Other high-end perks include a mezzanine, glass elevator, a spacious rooftop deck with a spa, and space for outside dining and lounging.

The property also includes laundry facilities and an attached garage. The convenient contemporary is located only minutes from Pacific Palisades and Santa Monica.

The ballplayer doesn’t seem to be leaving the area altogether. He may have another play in mind.

The Gold Glove winner purchased a golden investment opportunity in Malibu’s exclusive Carbon Beach in February, for $5.5 million, according to Variety. The development parcel is planned as a five-bedroom, 5,300-square-foot home with a huge deck, which will come equipped with a pizza oven and infinity-edge pool.

Yelich made his MLB debut with the Miami Marlins in 2013. Since 2018, the two-time All-Star and 2018 MVP has played for the Brewers. He has won three Silver Slugger Awards. Earlier this year, he signed a nine-year contract extension with the Brew Crew worth a reported $215 million.