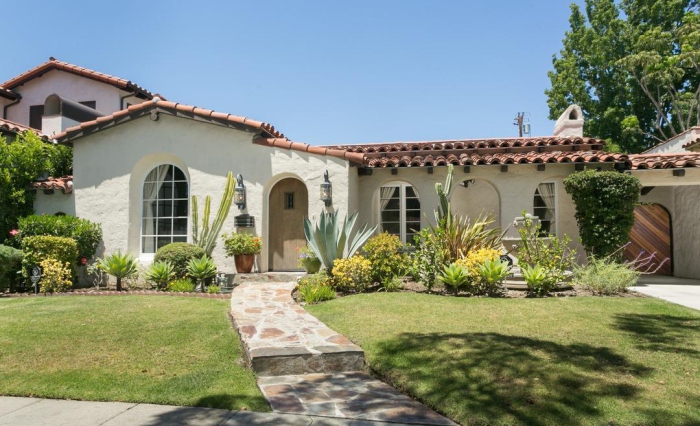 YOUR MAMA’S NOTES: The Los Angeles home of comedian, writer and actress Mindy Kaling has come up for sale at $2.195 million. The six-time Emmy nominated star, writer and producer of the celebrated sitcom “The Office” and, more recently, the writer, producer and star of her own sitcom, “The Mindy Project,” purchased the 1929 Spanish Revival cottage in the casually affluent Beverly Grove area not quite ten years ago for $1.575 million. Briefly listed for sale in 2013 at $1.8 million, the 2,674-square-foot, single-story residence has four bedrooms and three bathrooms.

A stone-floored foyer with pitched and wood-beamed ceiling leads to the formal living room where there are dark wood floors, a vaulted ceiling with muscular exposed wood trusses, a huge fireplace and a couple of arched display niches on either side of a humongous arched picture window. The over-sized dining room is large enough to host a small banquet and the adjacent family room has a second fireplace set between more arched display shelves plus a vaulted ceiling and several sets of French doors. The center island kitchen is well equipped if fairly ordinary, stylistically speaking, with speckled beige granite countertops, off-white raised panel cabinetry and high-quality stainless steel appliances. Bedrooms are generously proportioned — the master suite includes a custom-fitted dressing room with built-in cabinets and make up vanity — and all three bathrooms feature vibrantly colorful tile work appropriate to the era of the home. A long, gated drive runs along the side of the house to a detached two-car garage converted to a sky-lit fitness room and there are several stone-paved courtyards and patios around the house plus a pretty puny grassy backyard.

Miz Kaling, who will be seen on the silver screen in the upcoming “Ocean’s Eight” movie as well as the cinematic adaptation of Madeleine L’Engle’s beloved novel “A Wrinkle in Time,” previously owned a fixer-upper in the Hollywood Hills she snatched up in May 2013 for $1.695 million and, unfortunately for her pocketbook, sold in February of this year for $1.61 million, an $85,000 loss not counting carrying costs, improvement expenses or real estate fees.