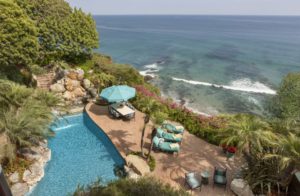 Johnny Carson’s former oceanfront Malibu compound has found a new owner who nabbed the spread at the end of June.

The sellers are Sidney Kimmel, the billionaire founder of Jones Apparel Group and a movie producer whose credits include “Crazy Rich Asians”, and his wife Caroline.

Despite the discount, the sale price is still above the $36.5 million the couple paid for the compound in 2007, buying from the estate of the late Johnny Carson, property records show.

Carson, an American television icon who hosted “The Tonight Show” on NBC, owned the house during his three-decade tenure on the talk show, property records show. He bought the estate in 1984, shortly after it was built, and lived there until his death in 2005 at the age of 79, according to records.

The triangular mansion, designed by Ed Niles, an architect known for his quirky architectural homes in Southern California, spans more than 7,000 square feet with four bedrooms. Other features include a bar and wine room, wooden skylights, floor-to-ceiling windows and an indoor arboretum.

On the adjacent land is a separate guest house and a tennis court with its own two-bedroom pavilion that has a kitchen, gym and locker room. 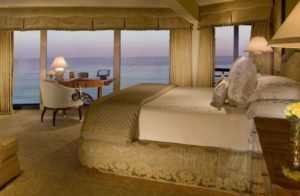