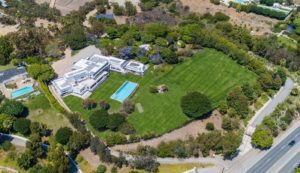 In Malibu, a three-parcel spread with a half-finished mansion is being shopped by retired NBA big man Kevin Garnett.
The 15-time All-Star has set the price at $19.9 million. Records show he bought the property, which then held a six-bedroom villa, in 2003 for $6.4 million.

Trees surround the 7-acre spread, and the grassy grounds slope slightly toward the ocean, which sits on the other side of the Pacific Coast Highway.

An 11,000-square-foot mansion is the focal point of the ocean-view property. The home is under construction and slated to be finished in 12 months, according to the listing agent. Should a buyer snap it up before then, they would have an opportunity to customize certain parts not yet completed.

A circular motor court sits at the end of a gated driveway that wraps around the entire property. Out back, the L-shaped estate borders a swimming pool and spa.
Eric Hassan and Barbara Tenenbaum of Hilton & Hyland hold the listing.
Garnett, 42, played for the Timberwolves, Celtics and Nets during a decorated career that saw him win an MVP award with Minnesota and an NBA championship with Boston. In 21 seasons, he tallied 14,662 rebounds, good for ninth most in league history.
He took a loss the last time he entered the real estate game. Four years ago, he dealt his modern home in Concord, Mass., for $3.635 million.