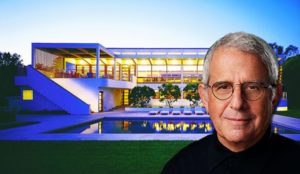 Malibu sellers are shooting for the moon.

NBC Universal vice chairman Ron Meyer is shopping his 3.1-acre Paradise Cove home for a whopping $125 million, a week after hosting a star-studded fundraiser there.

The 14,000-square-foot home sits atop a private bluff with access to a secluded beach, and includes five bedroom and six bathrooms, according to the Hollywood Reporter. Of course, there is a pool and a tennis court.

The estate hasn’t hit the market yet, but Meyer is reportedly entertaining offers. The New York Post reported in May that Meyer and his wife, Kelly Chapman Meyer, are splitting after 25 years of marriage.

A sale near asking price would eclipse the record breaking $110 million purchase of Peter Morton’s beachfront home in Carbon Beach in April.

It would continue the string of $40 million-plus home sales in Los Angeles County in recent months. Real estate pros credit the influx of domestic buyers to the area, along with sellers who want to capitalize on a high market. They also say buyers recognize value in L.A. compared to other big cities like London and New York, where there isn’t as much bang for the buck.

Meanwhile, Meyer was reportedly giving private tours of his home to guests during a fundraiser he held last week. A-listers included Barbra Streisand and Jennifer Aniston, according to the Hollywood Reporter. Snoop Dogg DJ’d the party.