High-powered, influential and extraordinarily well-compensated Netflix chief content officer Ted Sarandos — he oversees the streaming media juggernaut’s $6+ billion annual budget and personally hauled in $18.9 million in total compensation last year — substantially upgraded his residential circumstances in Malibu with the $20 million purchase of a celeb-pedigreed mini-compound along the Encinal Bluffs above picturesque El Sol County Beach. Property records indicate the casually plummy property was sold by L.A. based financier J. Blair Frank who rented the place to Janet Jackson in 2009 during which time she was interviewed in and gave a brief, tantalizing tour of the property.

The bluff-top mini-compound’s three-story main house, a rigorously symmetrical and crisply clean-lined contemporary take on an Italian palazzo with artisanal quality finishes that include a combination of wide plank wood and polished concrete floors and a mix of hand-plastered and wood clad walls, provides four bedrooms and four bathrooms in 4,636 square feet while a separate building contains a three-car garage and an approximately 600-square-foot guesthouse with two en suite bedrooms and a sitting room. 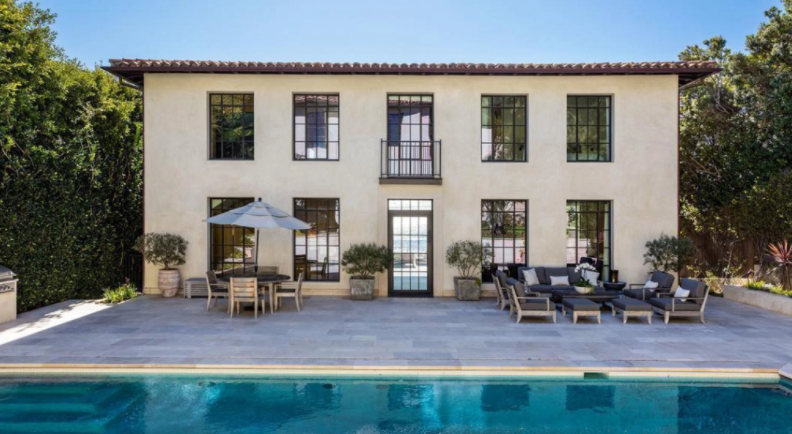 It’s a notably long, zigzagged flight of exterior stairs down from the gated motor court and then a trek across a pretty, wind-protected courtyard to the glass and steel front door of the main house where the airy, sun-flooded great room features a minimalist fireplace, a galley-style kitchen with black stone counter tops on sleek walnut cabinetry and a vast bank of glass panels that disappear into the walls to unite the room with a huge, stone-paved terrace with open sunset views over the Pacific Ocean. Additional leisure and recreation spaces include a family/media room and a high-ceiled subterranean game room/entertainment space.

Upstairs there are a total of four bedrooms. One bedroom has ship-like built-in bunk beds and another had direct access to an a large, partly ramada-shaded ocean-side terrace shared with the master suite that includes a bedroom with barrel-vaulted ceiling and spa-style bathroom with shower and toilet cubicles fashioned out of steel and opaque glass. The stone-paved entry courtyard, with swimming pool, spa, built-in barbecue and a couple of citrus trees, separates the main house from the two-story guesthouse.

It’s an undeniably arduous and exhausting if scenic hike down a serpentine stairway from the house to a sandy beach cove but fortunately for the lazy and/or the infirm a super-snazzy private funicular will alternatively and effortlessly ferry beachgoers from the terrace outside the main house to a grassy plateau a handful of steps above the sand.

This isn’t the only property in Malibu currently owned by Sarandos and his wife, Nicole Avant, daughter of former Motown Chairman Clarence Avant and former, Obama-appointed ambassador to the Bahamas. Just over three years ago, during the summer of 2013, the deep-pocketed pair actor/comedian/consummate ladies man David Spade$10.225 million for an ocean front house on Carbon Beach. The couple, who earlier this year sold their former home in Beverly Hills for $8.825 million to Ryanair heiress and lifestyle/luxury goods entrepreneur Danielle Ryan, also own the so-called Isidor Eisner Estate, an opulent, Gordon Kaufmann-designed Italian Revival mansion of more than 15,000-square-feet in the prohibitively expensive and historically hoity-toity Hancock Park area they bought in 2015 for $15,947,000 from Melanie Griffith and Antonio Banderas.