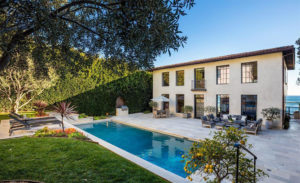 Colossally compensated Netflix Chief Content Officer Ted Sarandos, who enjoys an annual base pay of $1 million but with bonuses, options and other considerations, hoovered up nearly $22.5 million in total compensation for the 2017 fiscal year, has traded up from a $21 million dollar celeb-pedigreed ocean-front residence in Malibu, Calif., to a $34 million celeb-pedigreed ocean-view compound in the surprisingly low-key yet profoundly high-priced seaside community of Montecito.

The streaming service potentate and his wife, Nicole Avant, a former ambassador to the Bahamas and the daughter of music industry mandarin Clarence Avant, paid L.A.-based financier J. Frank Blair $20.25 million for a sumptuous villa perched high and privately above El Sol County Beach along Malibu’s uncommonly scenic and spine-tinglingly prestigious Encinal Bluffs in September of 2017. At one point, almost a decade ago, Blair leased the property to Janet Jackson and some of the other spectacularly sited homes at this somewhat remote northwest end of Malibu are owned by Neil Diamond, Michael Eisner and the ever-comely Cindy Crawford and Rande Gerber. Alas and despite their A-list neighbors, the Sarandoses quickly caught a raging case of The Real Estate Fickle and just over eight months later, as was first sussed and sorted by property gossip Yolanda Yakketyyak, made a $21.25 million hush-hush, off-market deal and sold the property to British pop star Robbie Williams. Williams is certainly no stranger to lavish living and already owns a not quite 25,000-square-foot Mediterranean mansion in Beverly Hills that he and his American wife, actress Ayda Field, picked up in late 2015 for $32.67 million.

Marketing materials from the time of the 2017 sale of the Encinal Bluffs villa indicate the three-story main residence, a crisply modern-minded variation of an Italian palazzo with expensively bespoke interior finishes and a scrupulously symmetrical exterior façades, contained four bedrooms and four bathrooms in 4,636-square-feet. A separate, two-story structure encompassed a three-car garage along with an approximately 600-square-foot guesthouse composed of two en suite bedrooms and a shared lounge. A wind-protected courtyard between the main house and guesthouse has a swimming pool, spa and a built-in barbecue while multi-level terraces along the backside of the main house offer unimpeded ocean and sunset views. A zigzagging pathway makes a formidably steep and lengthy descent from the house to the beach but fortunately for the out-of-shape, lazy and/or infirm, a private funicular will far more effortlessly ferry sand and surf seekers down the bluff’s precipitous face.

Perhaps and probably the Sarandoses decision to lickety-split flip the Encinal Bluffs property was their apparently quite keen and deep-pocketed interest in Ellen DeGeneresand Portia de Rossi’s ultra-plush Montecito compound, which property records indicate officially changed hands late last month for $34 million. Famously prolific buyers and sellers of often architecturally intriguing multi-million dollar homes located in some of SoCal’s most sought after and expensive zip codes, DeGeneres and de Rossi purchased the 16.88-acre estate in two 2013 transactions that totaled $28.8 million. The 30-time Emmy winning chat show dynamo and the “Arrested Development” actress, who last year dropped $18.6 million on an oceanfront contemporary compound along a particularly fancy-pants stretch of sand in Carpinteria, Calif., first listed their now former Montecito compound in early 2015 at $45 million. The price dropped to $39.5 million before it disappeared from the open market shortly after the first of this year.

The Sarandoses don’t appear to have given up a foothold in Malibu as the lucky ducks continue to own an oceanfront residence along La Costa Beach they scooped up in 2013 for $10.225 million from comedian David Spade. The couple additionally maintain an elegant mansion on more than 1.5 gated and landscaped acres in L.A.’s historic Hancock Park ‘hood they acquired in 2015 for $15.947 million from now divorced Tinseltowners Melanie Griffith and Antonio Banderas.

The Sarandoses have since extensively restored and updated the unapologetically grand, Gordon Kaufmann-designed 1920s manse, a slightly clunky but certainly eye pleasing pastiche of Spanish and Italian architectural signatures and flourishes, but at the time of their purchase, the mansion measured more than 15,000-square-feet with imperially proportioned and lavishly detailed public spaces plus extensive family quarters comprised of six guest and family bedrooms plus a master suite with dual bathrooms and double dressing rooms.