Would replace current bridge, which dates back to 1939. 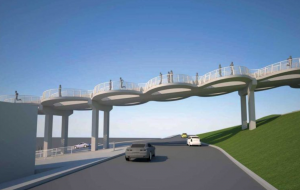 By David Mark Simpson and Knowles Adkisson / The Malibu Times

Santa Monica officials are weighing four designs to replace the aging bridge that connects the seaside city with its landmark pier.

The current bridge to the Santa Monica Pier was built in 1939 and is in desperate need of replacement.

Traffic on the bridge is a problem, city officials said. About 3,667 people cross the bridge on busy weekends, according to the 2006 proposal. Traffic is expected to get worse with the coming Expo Light Rail Line, they added.

In 2010, the council voted to apply for federal funding for a bridge replacement project. Last year, the funding was authorized through the Federal Highway Administration and council selected a consultant. Earlier this year they approved temporary upgrades to the bridge’s sidewalks to keep cars and pedestrians separate.

“The sufficiency rating of the bridge is at 29,” he said. “Just for comparison purposes, bridges rated under 50 are not even eligible for rehabilitation due to the level of degradation.”

City officials agreed to spend $400,000 on an environmental review of the proposals, bringing the total spent on the design process to $1.25 million. There’s not yet an estimate for the cost of the bridge, but both design and construction expenses are expected to be reimbursed by the federal government.

The final design is expected to be complete by fall of 2016. Construction will take 12 to 18 months.

Of the four options, two stood out most to members of the public, business community and city officials.

The first widens the bridge by 70 percent to 58 feet, allowing cars and pedestrians more room.

“That creates, obviously, some issues when we come to tie back into the pier at the bottom of the bridge,” said Jim Rucker, a project consultant.

The bridge, he said, would be wider than the existing pier.

The second recommended design replaces the current bridge with a similar bridge meant only for bikes, pedestrians and limited delivery or emergency vehicles. It includes a second bridge at Moss Avenue for vehicles. The public and the Pier Control Board favored this design at previous presentations, city officials said. This design would cause traffic impacts at Moss Avenue, but improves flow at the Ocean Avenue and Colorado Boulevard intersection.

The current grade of the pier bridge is too steep and does not meet ADA standards. Anyone trying to get from Colorado Avenue to the pier either has to use a car or get help, Pastucha said.

There is already an ADA-approved ramp from Ocean Front Walk up to the pier.

One suggestion involves installing an elevator that would drop disabled citizens down to the beach level, allowing them to use an ADA-approved ramp up to the pier.

Currently, there is an elevator from the beach level up to Bubba Gump Shrimp restaurant.

“I think it’s critical that we have ways for people to get on the pier that are safe for them,” she said.

Several Ocean Front Walk business owners strongly opposed a Moss Avenue bridge, noting it would result in Ocean Front Walk properties being boxed in between two bridges and would block their views to the ocean.

Tom Moran, who owns Sea Mist Rentals, said that the traffic in the area would get worse and create confusion.

“The impact it would have on that area would be devastating,” said his son, Duncan Moran.

Marty Mink, who owns several buildings in the area, said he didn’t hear about the community workshops until late summer.

“The Moss Avenue bridge will change the whole look, the feel, the open beach and boardwalk space that everyone enjoys,” he said.

A previous version of this story appeared in the Santa Monica Daily Press.